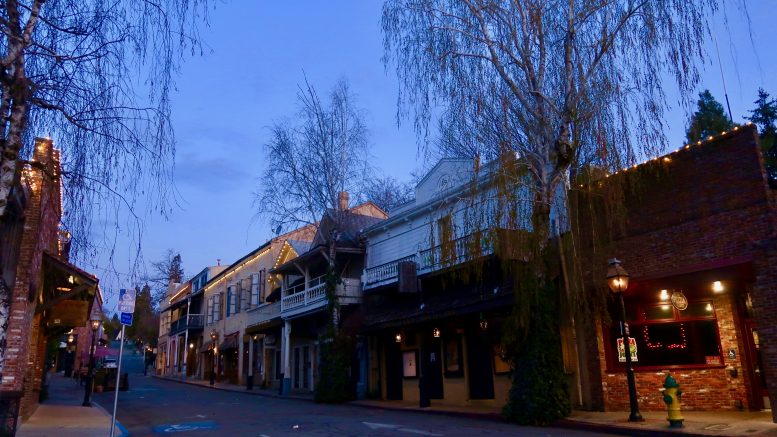 Oakley Hall spent his final years writing in Nevada City, a town that bears a resemblance to his setting in 'Warlock.' Photograph by Scott Thomas Anderson

The late Oakley Hall, who passed away in Nevada City in 2008, seemed determined to buck the expectations of what books belonged on which shelves. He knew the best novels tear the fabric of a reader’s reality, lassoing them into a landscape of words and images so evocative, sonic and rich, that it presents of the mirage of a second life. Hall’s 1958 novel Warlock is a pathfinder in this sense, a bold re-execution of the American Western that’s sweeping yet personal, poignant yet challenging, plot-driven yet stoked with personalities breathing on the page. It is dirt and dust you can taste in your mouth; it’s welling corruption felt under the ribs.

Hall was born in San Diego, served in the Marines during World War II and then launched his writing career while living in a Victorian-era house in San Francisco. He penned six highly regarded westerns, as well as a five-part mystery series featuring the writer Ambrose Bierce that was set in Gilded Age California. But of all these works, Warlock was his highest achievement, landing as finalist for the Pulitzer Prize for Fiction the year it was published.

The novel is centered on the merchants and citizens of Warlock, a fictional silver-mining town in California. These townspeople feel helpless, and at times humiliated, by the acts of lawless men. Pushed to desperation, they appoint a professional gunfighter named Clay Blaisedell as their town marshal – thus thrusting the mercenary and his killer friend Tom Morgan into a political struggle across the entire county. It’s a standoff in which few hold the moral high-ground. The cowboys tormenting Warlock live by intimidation; but Blaisedell and Morgan live an even colder existence by the gun. The ensuing confrontation probes the realities of finding freedom through violence – and declaring civilization through illusion.

Warlock has since earned a reputation as one of the most teleporting books ever written about California’s dark memories.

Hall had a similar achievement in 1978 with his ranch-war novel The Bad Lands, a remarkable exploration of greed, ambition, naivety and betrayal: It’s betrayal not only committed by men against other men, but betrayal of the entire American West by the decimating forces of progress. The Bad Lands is one of those rare novels that leaves a reader with equal parts of hope and emptiness.

After years of being out of print, The Bad Lands was re-issued in paperback by the University of Oregon Press in 2016. Warlock had been -re-issued by The New York Review of Books just two years before. Plenty sing their praises: Hall was a mentor to countless writers, including award-winning novelists Michael Chabon, Richard Ford and Amy Tan. His talent and versatility on the page eventually led him to become a founding instructor at the creative writing program at UC Irvine, as well as the Community of Writers Conference, which is still held annually in the alpine meadows of Olympic Valley. Despite these achievements, Hall used to refer to himself as “the most famous writer you’ve never heard of.” With Warlock and The Bad Lands widely available again, maybe it’s time this author who questioned the concept of frontier justice finally got some justice of his own.