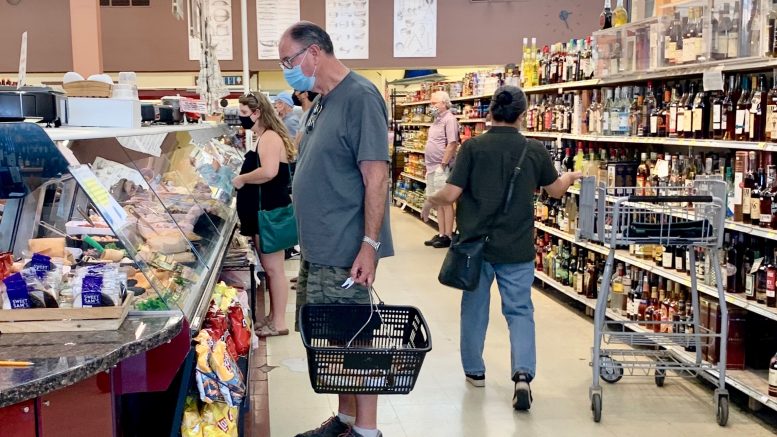 During a recent lunchtime rush, a small team of workers at Corti Brothers’ delicatessen called out orders as they wrapped and bagged sausage links, cheese blocks and bantam containers of freshly scooped pasta. These grocers were dressed with an Old School sophistication – collared shirts and formal ties beneath their long black aprons. It’s a sign that the neighborhood market takes its service quality as seriously as it did when Gino and Frank Corti founded the business in 1947. Back then, the brothers were determined to keep the Italian art of shopkeeping alive – that ability to help customers with the freshest vegetables, best-cut meats, and ideal ingredients for making dinner a nightly celebration.

By the time the Cortis opened the place, Italian markets had been a mainstay in Sacramento for nearly a century.

On Sept. 21, that cultural influence was finally recognized with an official ‘Little Italy’ designation for the city, an honor bestowed on the same east-area district where Corti Brothers, Talini’s Nursery, the late Español and other Italian-American businesses blossomed over the decades.

Northern Italians began landing in the region almost as soon as the Gold Rush began. Some tried their hands at mining, but most found success in building a permanent community as merchants, farmers, ranchers and winemakers. Then, in the 1870s, a bleak spell of famine and depression ravaged Italy’s southern districts between Naples and Sicily, prompting another mass exodus to the United States. Some of these seafaring hopefuls arrived in Northern California to work in its industrial gold mines. They toiled below the earth in operations like the Kennedy Mine, the Argonaut Mine, and Leland Stanford’s Lincoln Mine, all of which were located about 50 miles east of Sacramento.

The Italian-American heritage was entrenched around Sacramento’s Folsom Boulevard by the late 19th Century. And it has carried on into contemporary life: For more than 50 years – until recently – the restaurant Español was a culture-bearer for longtime Italian traditions on the avenue, having originally opened in Old Sacramento in 1923. Talini’s Nursery and Garden Center is another Italian-American staple on Folsom Boulevard. It’s founder, Pietro Talini, immigrated to the U.S. in the 1940s, spent years running a landscaping business in East Sacramento, then opened the nursery in 1976. During that same period, Frank Corti’s son, Darrell Corti, began to have a major influence on the California culinary scene. Between Darrell’s vast knowledge of international food imports, and his savant-like abilities with wine appreciation, the younger Corti offered pivotal guidance to groundbreaking chefs, winemakers and grape farmers across the Golden State and beyond.

On Sept. 21, the Sacramento City Council passed a resolution officially designating the area bounded by 48th and 59th streets, and J Street and Folsom Boulevard, as the historic Little Italy district.

“The Italian heritage has played a big part in the formation of Sacramento since its inception,” said Councilman Jeff Harris, who brought the resolution forward. “There were enclaves where people of Italian descent settled: Mostly in East Sac, but also in Southside and Oak Park. But, over the years, it’s really become the most concentrated enclave in East Sacramento.”

One person who’d been advocating for the designation was Fabrizio Sasso of the Sacramento Central Labor Council. A proud Italian-American, Sasso says that East Sac has been a kind of welcoming second home.

“I’m not a native to Sacramento, I’m originally from Stockton, which has a large Italian population,” Sasso explained during the announcement. “I was attracted to East Sac, not knowing the history. It just felt comfortable – there was familiarity – and it just felt like an Italian neighborhood.”

William Cerruti, director of Sacramento’s Italian Cultural Society, said there are more than 400 households in East Sacramento that receive his organization’s newsletter. For him, the official designation was a long time in coming.

“In recent years, we felt the Little Italy district, and the achievements of the people who created that thriving neighborhood, should be recognized,” Cerruti told the council. “Growing up in East Sacramento, there were so many Italian families, and there were entire whole blocks where, predominantly, all the families were Italian-American.”

Referencing the fact that masses at Saint Mary Catholic Church had been held in Italian for years, Cerruit added, “I was actually alive when they built Saint Mary’s; and it was in a field, and I was born on the last block where the farms were, when East Sacramento was mostly farm land … It’s time to claim this heritage and recognize it.”

Be the first to comment on "After generations of community building, East Sacramento gets recognized as ‘Little Italy’"