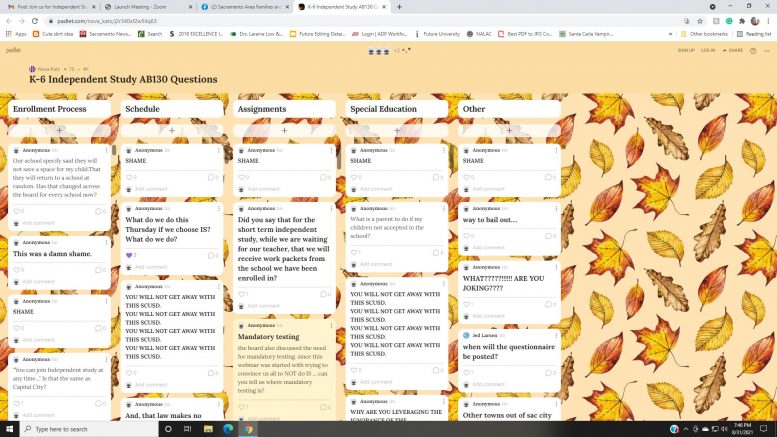 Delta variant clearly upended the District’s plans, showing a lack of preparedness – and that no one’s at the helm

Last Thursday, Sept. 2, was many kids’ first day of school across the Sacramento City Unified School District. But for my family, and more than 2,000 other households who expressed interest in the district’s online Independent Study option, it was just another day.

These families and their children were left stranded with absolutely no direction from the district. As parents of children 12 years old and younger, a group currently ineligible for vaccination, the worry of infection, especially as case rates once again surge in Sacramento, is one major reason that many are hesitant to send their children back to the classroom.

As the first day of school came and went with other parents posting cute photos of their kids on social media smiling behind masks, us “Independent Study families” were left to fend for ourselves. My son and I started a volcano project and continued our summer journal, just so his day wasn’t left empty. I work from home full-time and although that may sound easy, coming up with school work for your child while fielding phone calls, attending meetings and filing daily deadlines is no easy task. But, we made it. And my son was kept happy and healthy.

That Thursday evening, parents logged into yet another virtually-led SCUSD Board of Education meeting. Superintendent Jorge Aguilar asked parents to “give them a chance to show how safe” returning to the classrooms can be. He reminded all Independent Study parents that we could return to our home school “within five days,” if we changed our minds. That statement, felt like a bully tactic to force parents sitting at home with no leadership from the district to just send their kids back.

Was that the plan all along? Have no plan in place and force parents who won’t roll the dice on their child’s health to return? Sure seems that way. While some parents have general safety concerns of what everyday in-person learning looks like, others want more clarity from SCUSD because their children have health issues that could put them at heightened risk.

When it was my turn to speak during public comment last Thursday, I spoke directly to the board and to Aguilar, letting them know how my son’s first day went. I told them that I didn’t know what his second day of school would look like, and that Aguilar, nor the board, could even tell me that. Would I finally be assigned to an Independent Study teacher? Would I receive a phone call from someone at Capital City, the entity supposedly running this online learning program? How many teachers were hired to staff this program with an influx of parents who want this option? So many unanswered questions.

At the end of Thursday’s meeting, one board member, Leticia Garcia, who oversees Area 2 in the district, which includes Phoebe Hearst Elementary and Sutter Middle School, asked Aguilar if the board could give the parents left stranded at home some semblance of news as to what to expect the following day. Aguilar then asked parents to give the board by the end of business day on Friday, Sept. 3, then we would hear whether or not we will receive homework packets from either our home school, or the district. Did I hear anything from the district? No.

To be sure, there are some who may scoff at my choice to keep my son in distance learning. If I wanted a first day of school, I should have just sent him to school like everybody else, right? No. It is the law, AB 130, for the district to give parents an alternative learning option, especially during an ongoing deadly pandemic that is affecting all age groups. The truth is becoming more and more clear as the days keep tallying up where I have yet to hear a peep from the district about its plans for not only my son, but 2,114 families who also wanted to keep their kids safe at home through its Independent Study program.

Just last week, I learned about COVID-19 outbreaks at two SCUSD schools that returned to campus Aug. 9. New Joseph Bonnheim Community Charter Elementary School and New Technology High School. Both schools’ case outbreaks forced the Sacramento County Department of Public Health to intervene and order mandatory testing for all students and staff. Still, Aguilar said classes were to remain open today and would not close down the schools unless SCDPH ordered him to — and then he was even absent from the emergency meeting held between worried parents and the board.

As a parent navigating this hellscape, I’ve sadly learned not to rely on consistent communication from this district. I’m often left out of email blasts about important parent meetings, or mandatory surveys regarding Independent Study from the district. So, I instead keep informed through various parent-teacher Facebook groups I’ve been invited to. These groups keep me more informed and on track as I try to jump through all the last-minute hurdles the district sets out for parents who just want to protect their children who cannot be vaccinated at this time. And it’s not just my healthy 6-year-old. I haven’t even scratched the surface of children with special needs or Individualized Education Programs (IEPs). It’s a mess and the district is failing. It’s failing its most vulnerable students — and it’s a damn shame.

So, what will my child’s technical second week of school look like? Well, it’s Tuesday morning and I’ve yet to hear anything from the district about these potential homework packets they want parents to use as busywork until they hire enough teachers to actually staff the online Independent Study program at Cap City.

Why wasn’t this done over the summer? Well, if there wasn’t a program to begin with then parents have no choice but to send their kids back to school, right? If you’re a parent still without direction, like myself and the more than 2,000 others, know you are not alone. Write your board representatives and demand they work for your children. At this point, Aguilar failed and continues to disappoint the very children he claims to keep safe.