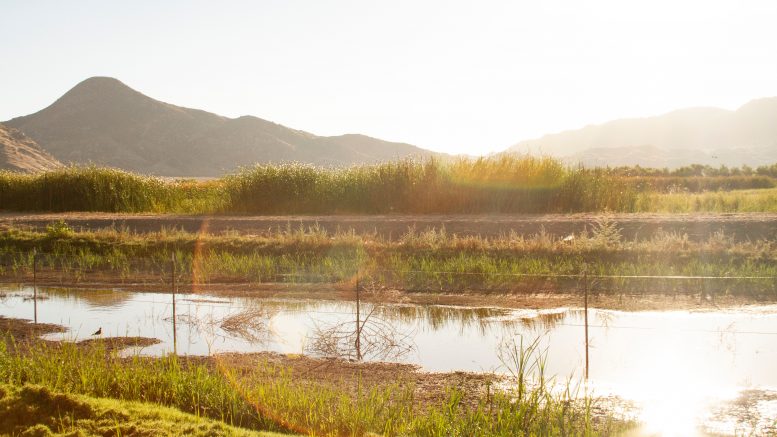 Sometimes when I’m selling at the farmers market, people ask if our tomatoes are dry farmed.  No, they aren’t.  Dry farming is a method of growing crops so that they develop deep roots that can access subsurface water instead of relying on irrigation. This summer, temperatures well over 100º have been fairly common and nighttime temperatures have lingered on the hot side as well.  Sometimes when it feels like an oven outside,  I imagine that the plants are basically baking out in the field, a situation not conducive to dry farming techniques.

I am an organic farmer in the Capay Valley, north of Sacramento.  We grow fruits, nuts, flowers and vegetables year round on the banks of Cache Creek.  Our farm, Full Belly Farm, is in Yolo County and we rely on water from the Creek as well as from underground aquifers (“groundwater”), to keep our crops growing during the heat of the summer.

If we could dry farm our summer vegetables we would, as extreme drought conditions up and down the state are affecting urban and rural alike.  Cities in several parts of California are now relying on trucked in water; Huntington Beach is about to build a desalination plant and the Edward Hyatt hydroelectric power plant at Lake Oroville was just shut down for the first time since it was built in 1967, all because of the water crisis.  We are used to comparing current conditions with “normal” averages, but how should we think about the current drought?  Maybe the envelope of what is “normal” has changed and we are moving into a hotter drier future in California.

Many of our fields can be irrigated using groundwater or creek water and because of differences in water quality we often have to strategize about which water source is best.  In the summer, Cache Creek is fed by releases from Clear Lake and Indian Valley Reservoir.  Those releases ended on June 28th this year (not much of a summer season), and now there are long sections of the Creek that are completely dry, with a few deep springs here and there providing respite for the remaining living fish, that are certainly doomed.  We have stopped using one of our wells because our neighbor felt our use was affecting theirs.  All of this will drastically reduce our fall planting options.

In order to provide salinity control in the Delta and minimize drought impacts on fish and wildlife, the State Water Resources Control Board has released a Drought Emergency Regulation that caused an uproar in farm country.  The Board had already told water users in the Russian River watersheds in Mendocino and Sonoma Counties that they could no longer use water from the rivers, and those same restrictions were extended to thousands of farmers in the Sacramento and San Joaquin River watersheds on August 20th, even those who have some of the strongest water rights that exist in California’s complicated system.

I bring this subject up endlessly with non-farmer friends and mostly they are clear on one point: Of course, the farmers shouldn’t take water from the rivers when the fish are all dying. But on the other hand, those farmers may have to lay off crews that have worked for them for decades past.  The fruit growers will have to stop watering trees that represent the next few decades of their livelihood.  Several CSAs (farm box projects) in the Russian River watershed had to close when their water rights were curtailed.

A balance that includes agriculture among all the demands on California’s water is hard to find, especially because historically, agriculture has plenty of culpability when it comes to overuse of water and damage to fish runs. In his book, The Dreamt Land, Mark Arax describes Central Valley farms that suck irrigation water from hundreds of feet below the ground’s surface with their deep wells.  He documents how some farms have finagled access to surface water in order to irrigate their orchards – not just to keep them alive, but even to expand them during droughts.  The maneuvers are underhanded and sometimes illegal.

One proposal, from Community Alliance with Family Farmers  (CAFF) is that the state should provide support to remediate the wells on farms of 200 acres or less. A program to help rural residential and towns with drinking water wells that go dry already exists, but there is no equivalent program for small farms.  The CAFF proposal would go some way towards leveling the playing field, but the idea may shock many people, given that the aquifer is in dire condition.  The alternative is that as various regulatory processes grind forward, those with the shallow wells will suffer more and those left standing on two feet will be the ones with the deeper wells.

In addition to funds for well remediation on small farms, the CAFF proposal suggests direct relief for small-scale farmers and dry farming education focused on wine grapes in the coastal regions. How to apportion water in California is one of our wicked problems.  We tend not to want to think about it until we’re in big trouble, but there is a growing likelihood of droughts and floods that fall outside of the scope of our “normal” expectations.  There are a lot of voices already at the table trying to figure it out, but as with some of the other issues we face, we may be approaching an hour of reckoning.

1 Comment on "Essay: The Sacramento region’s small farmers are on the frontline of a water crisis"