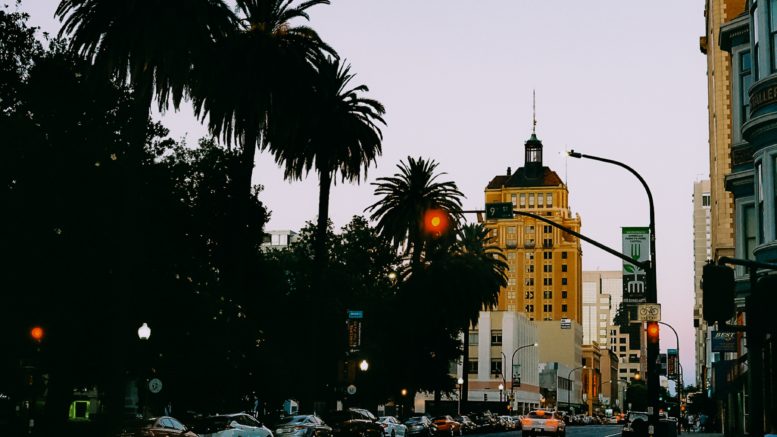 The competition for the Senate District 6 seat got a little thicker after local law enforcement officer and entrepreneur Matthew “Matt” Burgess announced his candidacy last week in downtown Sacramento.

Burgess, a California Highway patrolman, will join Genesis Baptist Church pastor Dr. Tecoy Porter as the only two African  Americans vying for the office in the 2022 primary election.

The top-two tier of the race will be decided in the Nov. 8, 2022, general election. Burgess made his official announcement last week in downtown Sacramento.

“This is an opportunity. Sen. (Dr. Richard) Pan is actually terming out so what better opportunity is there to put your name in the hat coming with 20 years of experience as a law enforcement officer, and as a businessman as well,” Burgess said. “I also have a heart for the community knowing that we need law and order. And also understanding we have other issues within California as whole.”

“This is a momentous occasion for me that has not come lightly nor without deep consideration. I’ve thought long and hard, I’ve prayed, consulted with my wife, my family, friends, and beloved Genesis congregation,” Dr. Porter said during a virtual news conference in January. “With their full support, I am launching my campaign to become the next California senator for District 6.”

“The message I am trying to get out to our diverse voters is that it is time for change,” Burgess said. “I am your everyday person. “I am coming into this office to continue to work for the people of California. And when I say work for California … I mean it. I am not self-serving.”

Burgess and Dr. Porter, both of whom have never been elected to public office, also will have to contend with Sacramento City Councilmembers Angelique Ashby (District 1) and Eric Guerra (District 6).

Ashby will give up her council seat because this is a District 1 election year. The seat of Guerra, not up for reelection until 2024, is safe.

Politician Dave Jones also will be on the Senate District 6 ballot. Jones, who lives in Curtis Park, has served on the Sacramento City Council, in the state Assembly, and as the state’s insurance commissioner from 2011 to 2019.

Dr. Pan, first elected to the Assembly in November 2010, will be termed out of the seat he has occupied since 2014. Pan already has thrown his support to Ashby, who has been on the city council since 2010.

Guerra, a graduate of California State University, Sacramento (Sacramento State), was elected in a special election in 2015, filling in for former District 6 representative Kevin McCarty. McCarty was elected to the Assembly in District 7 in 2014.

Dr. Porter announced in January that he was running for the Senate District 6 seat. In addition to pastor of Genesis Baptist Church in South Sacramento, he is president of the Sacramento chapter of the National Action Network, and is affiliated with the NAACP and California Democratic Black Caucus.

Guerra, Ashby, Jones, and Porter are running as Democrats. Burgess told The OBSERVER that he is a “moderate Democrat.”

“I am a moderate Democrat and I am happy to say that,” Burgess said. “But at the end of the day, I think that we have more in common than we don’t. So if we can treat everyone with humility, ethical as a human being, but also look at the real issues that plagued communities, we can start to make change.”

Burgess has served in law enforcement in California for the past 20-plus years. In the role as a public servant, he has mentored the youth in his local community and abroad.

In his personal time, he used his culinary skills and love of food to gain recognition as the co-founder of a family-owned food and beverage brand, Burgess Brothers, with his twin sibling Jonathan, who is a career firefighter.

Burgess is well aware of the issues surrounding a fractured relationship between law enforcement and communities, especially the Black population. He said all is not lost and that the entities can work together and “bridge a gap.”

“It’s imperative (that we get along),” Burgess said. “We need law enforcement and we need our communities. It’s imperative that we find ways to work together and not just talk about it. But let’s face it: there are some things that we cannot overlook and we have to call it out when there are bad officers out there. But also we have to recognize officers who are going to work every single day and doing the right things.”