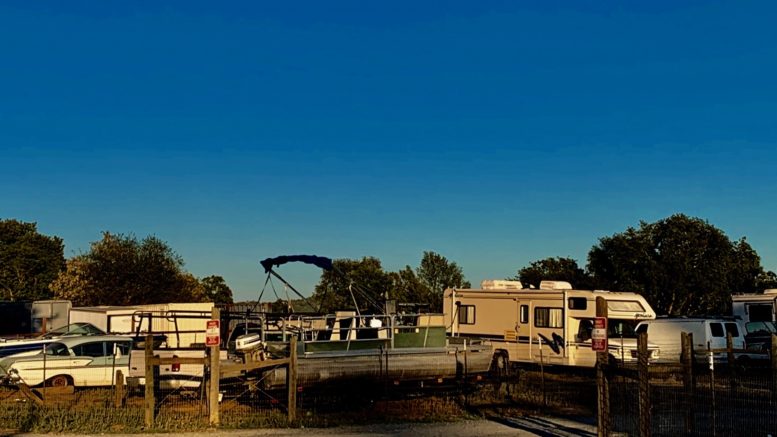 The overflow lot for The Oaks where Trinity Johnson's body was found. Photo by Scott Thomas Anderson

For investigators, it was two shocking discoveries in a 24-hour window – a pair of women who’d vanished from the quiet ranchlands east of Sacramento turned up dead, each brutally murdered and stuffed into totes concealed in different storage areas along the weeds and windbreak trees near Lake Camanche.

The main thing the victims had in common was a drifter from Arizona named Dante Campbell.

Campbell’s recent decision to plead guilty to two counts of first-degree murder has freed authorities to discuss the grisly details of his crimes, noting how a stroke of luck and some fortuitous timing likely stopped him from putting a third dead woman on his ledger.

Campbell lived in The Oaks, an isolated mobile home park on the outskirts of Ione. Tucked between the remote homesteads of Buena Vista and a scrubby rise of flat-head buttes, the community is a short drive from Mule Creek State Prison. It’s had ongoing crime issues for years. Campbell first appeared at the park in the early spring of 2020. The 49-year-old had come from Maricopa County in order to move into a unit with his aunt. Campbell eventually started dating a 46-year-old local named Trinity Johnson. She’d been staying at different peoples’ homes leading up to meeting him. Her caring, generous nature was something friends and family often talked about.

For a while, Johnson was living inside Campbell’s travel trailer, which was parked at his modular unit in The Oaks. But Campbell and Johnson got into a heated argument on Christmas Day, 2020, after she dropped by his unit with another man. Within 24 hours, Johnson was gone without a trace.

Campbell later admitted that, on the day after Christmas, he and Johnson were inside the trailer when she mentioned she was leaving him. Campbell threw her down onto a bed and pulled out a machinist scraper – a single-edged tool roughly shaped like an ice pick – and began a vicious attack. After Johnson was lifeless, Campbell wrapped her inside an inflatable mattress, stuffed it into a plastic tote, and then secured the makeshift shroud with duct tape.

Campbell had actually contemplated doing this for a while. He’d eventually confess to having dreamed up a list of “people who had to die,” people who were “foul,” and by the time his girlfriend was in the trailer, she was at the top of it. Campbell later moved the trailer across the street from the Oaks into an overflow lot cluttered with cars, boats and RVs. He returned to it several times to spray the body with Lysol, hoping to keep the smell down as warmer weather approached.

Despite Johnson’s disappearance, she wasn’t officially reported missing; but that doesn’t mean she had vanished without anyone noticing. Over time, a woman acquainted with Campbell became convinced he was hiding a body – and that those remains belonged to Johnson. Her intuition was based on things she’d seen while with him, as well as some innuendos he had made.

“At the time, Trinity wasn’t even classified as a missing person,” recalled Amador County Sheriff’s Sgt. Nathan Woods, the lead detective in the case. “If you do this job long enough, it’s natural to be a little skeptical when someone comes forward with that kind of story, but, looking back, I think what we did right was to not just chalk this up to something in her head. We took it seriously from the start.”

The Sheriff’s department set up a surveillance team to watch the overflow lot. On Feb. 11, deputies spotted Campbell walking toward his trailer. Woods made a judgement call to confront him then and there. The detective appeared, initially telling Campbell, “Look, we just need to find Trinity.”

The two began talking, which led Campbell to make various statements suggesting he’d somehow harmed Johnson. He was detained as the deputies and a CSI team descended on The Oaks. After warrants were written for Campbell’s home and the trailer, Johnson’s fate was finally known.

As the sun set, a man driving on Jackson Valley Road noticed the convergence of crime tape and emergency lights. Once he understood Campbell was at the center of something terrible, he told detectives that his ex-wife, 59-year-old Deborah Meredith, had been spending time with the  suspect before recently disappearing. He also mentioned that he thought Campbell and Meredith had leased a storage container together four miles south of The Oaks along Highway 88.

Woods asked deputies to drive over to the mini-storage facility the same night he was processing Johnson’s crime scene. Once the patrolmen arrived, they determined that Campbell and Meredith had in fact rented a unit together there. Deputies decided to conduct a welfare check inside of it. That’s when they made a second gruesome discovery.

According to Campbell’s full confession, at some point he’d told Meredith he was responsible for Johnson’s disappearance. This, he then decided, made her a liability.

Just two days before investigators were contacted by the first witness, Campbell coaxed Meredith onto his property, where he stabbed her twice in the neck with the same machinist scraper he’d used to slaughter the first woman. Campbell began to stuff Meredith into another plastic tote before wrapping it with duct tape. After deputies entered the storage shed, they quickly took notice of the exact type of tote that was being processed into evidence back at The Oaks. They also found Campbell’s machinist scraper.

When Woods spoke with Campbell about Meredith, the killer remarked that it wasn’t just a matter of necessity that led to her death, but also because it was “better to have two murders under you than one.”

That has stuck with the detective. “This will probably be the most heinous crime I ever work in my entire career,” he reflected.

And, if the initial witness in the case hadn’t come forward when she did, the story might not have ended there: Authorities ultimately pieced together that Campbell was planning to find the witness later on the day that he was captured. He’d already killed one person who could implicate him in Johnson’s vanishing, and all signs suggested he’d made that determination again.

“Fortunately, that’s right when the Sheriff’s detectives arrested him,” said Amador District Attorney Todd Riebe. “It was serendipity. She really could have been his third victim.”

Given Campbell’s eagerness to kill and habit of dreaming up hit lists, authorities in Maricopa County were made aware of what happened at The Oaks. In the meantime, Riebe and lead prosecutor Lindsey Dell’Orto had a hard choice to make.

“We decided not to seek the death penalty,” Riebe explained. “We thought it would just delay the proceedings, especially with COVID, because we’re probably going to be experiencing difficulties getting regularly seated jury panels for another year. We didn’t want this to keep dragging on and on for the victims’ families.”

The veteran prosecutor added, “Plus, Governor Newsom has suspended death row indefinitely in the state.”

Two weeks ago, Campbell was sentenced to life in prison without the possibility of the parole. The D.A.’s Office wouldn’t settle for less.

“Given the facts of this case, we really believed this is an individual who should never walk free in society again,” Riebe stressed, “especially when you look at the cruelty of his acts.”

“She would give the clothes off her back for strangers, even tried to be Dante’s friend and he killed her,” she said of her mother, “killed her and hurt so many with just one action. Something that can never be undone.”

Be the first to comment on "A rural horror story: Detectives found Dante Campbell’s victims just as he eyed another woman"