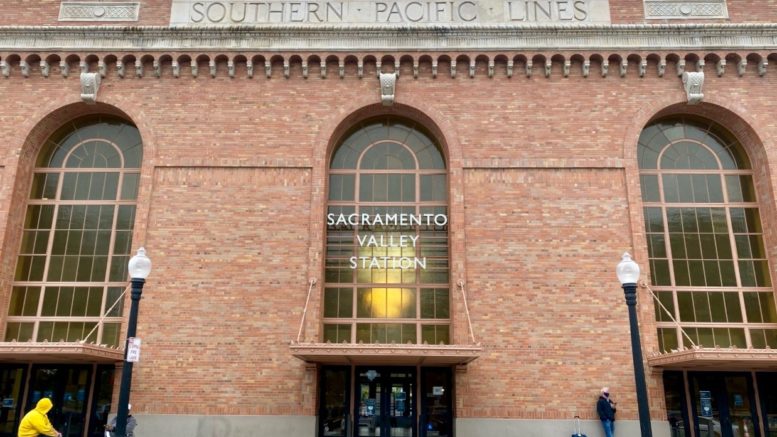 Sitting on a time-worn wooden bench in Sacramento Valley Station, Noah Williams, 22, remarks that the train station is the most crowded he has seen since he started regularly riding the Capitol Corridor over two years ago.

“I don’t have a car, so I don’t really have a choice other than the train,” Williams said. “I ride Capitol Corridor every couple weeks or so to visit my family on weekends off from school.”

In the past couple months, Williams has noticed that the trains have grown busier again, particularly in the mornings.

The increase in riders will only continue in the coming months, as more people return to their work and schools in-person. With the vaccine available to train crews and riders, many are also growing more confident about getting back on the trains.

Capitol Corridor, a train service that runs between Sacramento and San Francisco and surrounding areas, mainly serves commuters. Ridership saw a precipitous drop to only 10% of normal during the height of the Covid-19 stay-at-home orders, but Capitol Corridor has started rolling out steps to return to its pre-pandemic operations. Though a surge in riders stemming from many people having moved to the greater Sacramento area in 2020 may be on the horizon, Capitol Corridor is confident that it will be up to the task.

An estimated 24,000 people a year moved to the Sacramento area from the Bay Area between 2014 and 2019, according to the Greater Sacramento Economic Council, and that number is likely far higher for 2020. Data analyzed by the real estate site Redfin indicate that house prices went up 14%, sold weeks sooner when placed on the market, and that sales of more expensive houses in the region went up by 86% in 2020. Redfin attributed a majority of the increased demand to people moving to Sacramento from the Bay as work-from-home policies began to grow more common.

In a midyear budget review meeting in February, Sacramento City Council attributed an unexpected increase in revenues from property and sales taxes to the same influx of new residents moving from the Bay Area now working from home. Soon, however, many of these new Sacramento area residents may be called upon to return to work, and Rob Padgette, managing director of Capitol Corridor. He expects many Bay Area transplants to turn to the Capitol Corridor service for their new commute.

“We will benefit from a lot of the individuals that have moved up here, and hope we will carry a lot of those folks,” Padgette said. “This reinforces the need to invest in this rail corridor between Sacramento and the Bay Area long-term because we don’t see it slowing down at all in the future.”

While Capitol Corridor has plans to expand service in early June, Padgette anticipates that the real surge in riders will come later in 2021.

“My guess is to see a real jump in ridership in September, when schools and offices really begin to reopen. That’s when we’re going to see our ridership really take a big jump,” Padgette observed. “We still have to monitor health conditions — god forbid there’s a change in the trajectory. But right now it seems we are through the worst of it.”

Claire Chavez, 28, said she hadn’t used the Capitol Corridor service in over a year because of COVID concerns. Chavez said she now feels as safe riding the train as she did used to before the pandemic.

Luckily for riders like Chavez, Padgette anticipates that the influx of new residents will not have as significant impact on train crowding, taking into account that many major employers in the Bay Area such as Facebook, Salesforce, Apple, and Google have all announced plans to reopen in limited capacities, with many employees only having to come into the office once or twice a week.

Be the first to comment on "Is the Capitol Corridor train on track to meet an increase in riders?"