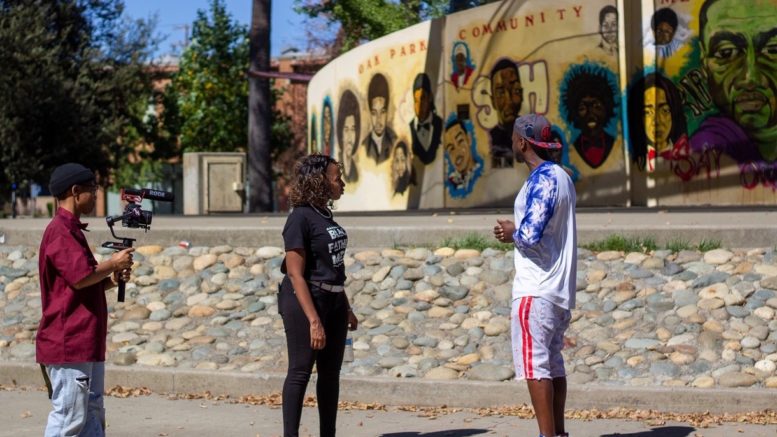 What price can a city put on losing one of its most culturally rich and historically important Black neighborhoods? That’s the question an upcoming grassroots Youtube documentary series is asking, as well as the broader question: Is anyone in Sacramento leadership even thinking about the price?

“Speak Out Oak Park” was produced by Oak Park housing advocate Eliza Deed, with help from Michael Benjamin II, a community organizer who was born and raised in the neighborhood. The 8-hour-plus collection of community voices examines the future of Sacramento’s first historic suburb.

African-Americans began moving into Oak Park six decades ago in the wake of their thriving neighborhood the old West End getting razed by the City and then reclaimed “for the white business class,” according to noted historian William Burg. In the 1960s, Oak Park became home to the city’s first Black interest newspaper, The Sacramento Observer, and the region’s headquarters for the Black Panther Party. It’s also the neighborhood that both the co-founder of Sacramento’s Black Lives Matter organization, and the city’s police chief – the first Black chief in its history – grew up in. But the question of whether the families who make up the cultural fabric of Oak Park are being slowly unthreaded from its tapestry of life now looms large. What was initially heralded as a revitalization of its avenues a decade ago has begun to look more and more like gentrification and organized displacement to many longtime residents.

Such concerns have taken on even greater intensity since 2015, as California’s unchecked housing prices have compelled many well-payed Bay Area tech workers to retreat to the Capital Region, essentially out-bidding and out-pricing Sacramantans on housing in their own communities.

Deed, who was already involved in tenant advocacy before moving to Oak Park, began having profound conversations with locals about the stress they felt about the neighborhood’s future. She started documenting the interactions as she introduced herself to more residents who spent time in McClatchy Park. She was also walking neighborhoods for new conversations. She ultimately interviewed more than 43 families. These exchanges are what make “Speak Out Oak” grounded in Oak Park authenticity.

“A lot of these families have stories about housing discrimination, from the 1940s right up to what’s happening now,” Deed told SN&R. “I started the documentary because I wanted to help the community heal.”

She wasn’t alone. Benjamin and his friends began to have concerns in the 2000s, when Kevin Johnson spearheaded a major redevelopment project at the corner of Broadway and 35th Street.

“You could tell that redevelopment wasn’t going to be too welcoming to the people of Oak Park – that it wasn’t for us,” Benjamin recalled. “When you’ve got a Starbucks coming, it’s already over. That’s almost like a bat signal to tell gentrifiers that this place is safe now.”

Johnson’s legacy as a leader and developer does come up in “Speak Out Oak Park,” including during an interview with Carl Pinkston, Operations Director of Sacramento’s Black Parallel School Board.

“When Kevin Johnson came along, they needed another Black face to do the development projects again,” Pinkston says in the film, “who would use city money, white developments and a Black face – perfect gentrification program.”

A recurring theme Deed encountered during the nine months she worked on the docuseries was that the Johnson-led changes to Oak Park brought an aftermath of home speculators who purchased low and flipped high, making it harder for younger people who’d grown up there to stay – or keep up with escalating rents. More pressingly, the real estate apparatus now seems to be marketing working-class Oak Park to higher-earners from other parts of the city and state.

“The main thing that just kept coming up is, ‘We’ve never seen this influx of white families moving into Oak Park before,’” Deed explained. “And it’s true that this has always been a predominantly Black community.”

For his part, Benjamin’s quick to point out that destroying older buildings to make way for so-called progress has also wiped away history from this place that was an original hotbed for Black activism.

“What gentrification does is not only displace the actual people, it displaces the stories,” Benjamin stressed. “With all these new development projects, it takes away the physical places with all the history, and those stories are lost.”

The team behind “Speak Out Oak Park” believes one company that’s currently a driver for gentrification is Grounded Real Estate. By Deed’s count, the real estate and development partner has bought scores of commercial properties there. It’s also selling homes in Oak Park, the bulk of which are listing for more than $400,000, with one even priced at $700,000. Deed says that while Grounded has done some philanthropic things in the community, it doesn’t seem to be paying attention to the bigger picture of how the neighborhood is unraveling.

“A lot of us think that Grounded and other development companies need to come in and speak with us,” Deed said. “We have many possible solutions for compromises; but right now, they are just doing whatever they want to do. Right now, it’s about them having meetings about us behind closed doors.”

Grounded Real Estate did not respond to interview requests for this story.

Benjamin wants the docuseries to spark a wider conversation about the future of Oak Park.

“I hope people get an appreciation for the stories, and realize that this was a tightknit neighborhood that took care of itself,” he said. “For a long time, it still really felt like a place where there was community. Yeah, we went through tough years, which caused the community to get painted with a broad brush. We had to deal with people portraying it as the hood; but as a young man, I got a lot out of Oak Park – a lot of lessons and a lot of love.”

Be the first to comment on "Speaking Oak Park’s truth: Upcoming Youtube docuseries tackles gentrification through the voices of residents"