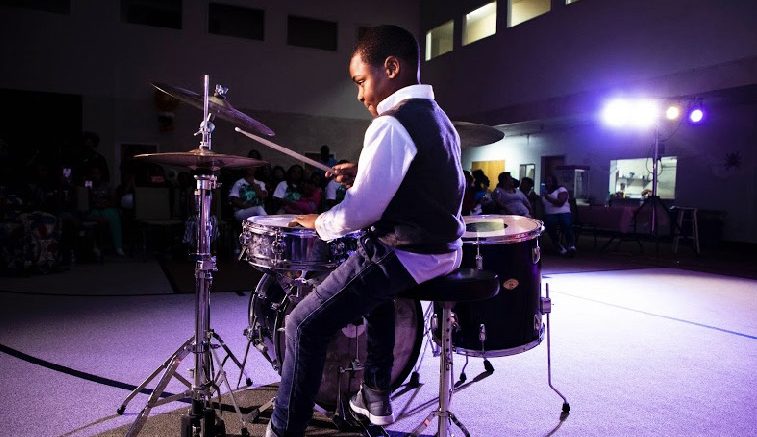 James Jackson sees a bright future for Sacramento’s youth, even though he survived a personal nightmare that could shake any parent’s faith in young people.

Jackson is the founder of iSound Performing Arts, a nonprofit that helps kids focus on singing, dancing, playing musical instruments and handling sound production—all as a way to channel for their restless energy and foster healthy friendships. So far, the parents bringing their kids to iSound say they’re also seeing an unexpected benefit—confidence building.

Jackson has been involved with music for decades. A choirmaster and vocal trainer, Jackson led Sacramento’s Born Again choir for years before moving to Atlanta to work on entertainment productions.

On Feb. 22, 2015, he received the worst news any parent could get: His 20-year-old son, James Jackson Jr., was killed in a drive-by shooting. James Jr. had parked in his car near a shopping center in Meadowview with two friends. Jackson says that his son wasn’t the target of the attack, but was the one to be hit by a fatal round.

When Jackson learned that his son had been shot by teenagers, he began contemplating moving back to Sacramento to get involved in what was happening with the area’s youth.

“I needed to turn this crime into something that would honor my son,” Jackson recalled. “I decided to come back and start up this school.”

Jackson got iSound up and running in May 2019. The organization looks to instill a love of music in young people in a way that opens them up to broader life skills. Some kids opt for vocal training. Others throw themselves into dance. Many jump into mastering a musical instrument. Lately, aspiring rappers, lyricists and poets are getting involved, too. Whatever path students choose, iSound couples their lessons with learning about healthy eating, active living, the finer points of etiquette and the impacts of school bullying. Jackson says the program is about giving the kids a path that will deter negative thinking and keep them away from gang violence.

If that sounds heavy, it all happens in a way that’s fun and inspiring.

Sommer Hayes has been bringing her 8-year-old son, Johnny, to iSound, where he’s been learning to sing, write music and play guitar. She says that Johnny hasn’t just been budding into a multi-talented artist, he’s also been growing out of his natural shyness.

“He absolutely loves that he gets to hang out with like-minded kids, meaning kids who have a real interest in music and performing arts,” Hayes said. “He’s opened up a lot thanks to the wonderful classes and coaches at iSound. If you see him in person, and then see who he becomes on stage, it’s like two different people—and James gives him that confidence.”

Nakisha Woods has seen a similar effect on her children. Her 13-year-old daughter Bobbi, her 10-year-old daughter Brea and her 8-year-old niece Adaya all attend iSound. Woods says the program helps the kids have fun while learning about the importance of empathy.

“They enjoy the community that’s being built, and that they can go to a safe place to express their talents,” Woods said. “They love to sing, and they love the dance routines, but they also love the team leaders who are helping them. They’re taught how to really project their voice without being insulting or hurting to anyone else. That’s been a powerful message for them.”

Staying together through the lockdown

iSound kids have already performed in Sacramento’s Martin Luther King Jr. parade and the Black Joy Parade in Oakland. They’ve done two live numbers on “Good Day Sacramento” and were scheduled for a national debut on the “Ellen” show in July.

But that appearance was delayed because of the pandemic.

Jackson and his team have kept iSound going throughout the lockdown through a combination of Zoom classes and socially distanced events. At the onset of crisis, Jackson wanted to give the kids a sense of stability. So he threw a virtual pizza party, a carefully coordinated event in which he and parent volunteers delivered pizzas to every family with a child attending iSound. Then, the students sang, danced and ate pizza together while on Zoom.

Hayes says the party was a blast, but was also a way for adults to check in with students to see if they were experiencing stress or feeling lonely. “It was done in a way that was reinforcing wellness among them,” she said.

That was important to iSound staff member Shanta Aldridge, who first met Jackson as a teenager when she joined his Born Again choir. Aldridge says that singing and traveling with that choir gave her a strong sense of self while teaching her to better relate to others. It was so formative that Aldridge is now determined to pay it forward through her work with iSound.

“When the kids feel there’s a safe environment, almost immediately they begin to blossom, so it’s about more than music,” Aldridge said. “And when you talk about the arts in school, from the African-American community standpoint, it’s almost begun to get lost … A lot of the young people have responded so positively to being able to express themselves through instruments, and singing and writing lyrics that you can see it helps take their minds off the everyday things.”

On Aug. 26, the young performers shot a socially distanced music video on the Tower Bridge. It was the latest experience iSound brought them with a limited budget of about $25,000 a year that comes almost entirely from small donors. (People interested in supporting the program can donate at isoundperformingarts.org.) One major benefactor has been Pastor Jim Dorsey of the Arden Church of the Nazarene, who gave the program its physical home inside his church.

From Woods’ perspective, it’s important for Sacramentans to understand that iSound is not just building up the kids’ self-esteem, it’s also making them want to create a new future for the city—a future that’s violence-free.

“They know the story of how this program was birthed,” Woods said. “And they know that, by participating, they are being a voice of peace.”

Hayes agrees. “I’ve told James that, even though your own son couldn’t be saved, you’re out here saving other peoples’ children. I know that in my heart.”

1 Comment on "The sounds of hope springing from tragedy"