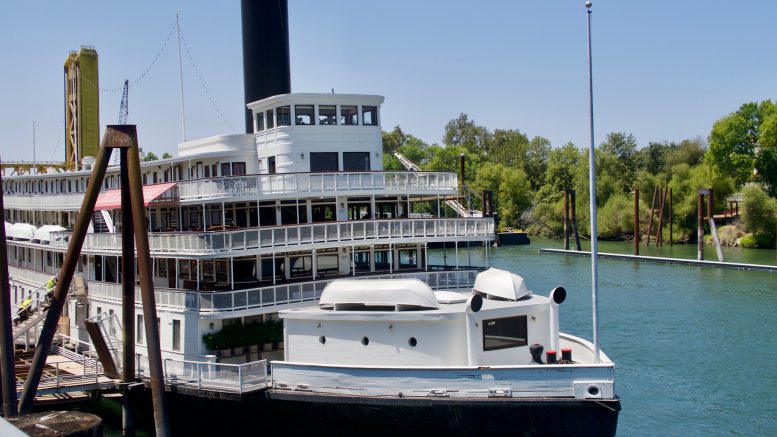 The Delta King dates to an era of gambling and boozing that is brought to life in Gary Noy’s new nonfiction book, “Hellacious California! Tales of Rascality, Revelry, Dissipation and Depravity and the Birth of the Golden State.”

Whatever California was before the Gold Rush, the glitter boom of 1849 created a land of perpetual contradictions, confrontations and painful self-discovery. For author and historian Gary Noy, that rocky road into modernity still has nuggets of wisdom waiting to be unearthed.

It’s the kind of treasure he is sharing in his latest book, “Hellacious California: Tales of Rascality, Revelry, Dissipation and Depravity and the Birth of the Golden State.”

Noy has spent 20 years writing about the communities that sprang up in the wake of James Marshall spotting a suspicious glimmer in an El Dorado County creek six generations ago. While some of that work involves pure tragedy, such as the internment of Japanese-Americans during World War II, Noy’s most recent books have a more subtle poignancy embedded in a kind of rough and tumble entertainment of the West.

His 2014 release, “Sierra Stories: Tales of Dreamers, Schemers, Bigots, and Rogues,” was a fun wagon ride through various strange backcountry sagas. Noy followed that in 2017 with “Gold Rush Stories: 49 Tales of Seekers, Scoundrels, Loss, and Luck,” another testament to the remarkable spirit of individuality bred in the early years of statehood.

Now, with “Hellacious California,” Noy is expanding his lens beyond the mining camps from Sierra City to Sonora to look at the entire state, and he’s focusing on something that was almost universal to all towns and cities under the banner of the Bear flag—being naughty.

Noy says the topic was a natural outgrowth of the research for his previous two books.

“The same themes came popping up all the time,” he said. “What everyone did—good, bad or indifferent—it was tied in some way to a kind of vice. I decided I wanted to focus on that, the aspects of California that were rollicking, but also dangerous and disturbing.”

“Hellacious California!” doesn’t disappoint on that front. A thick tome of intriguing tales, it features in-depth chapters on gambling, drinking, fighting, conning, dueling, gluttony and prostitution. One of the fascinating moments from Sacramento’s past revisited in the book involves a duel between newspaper editor Edward Gilbert and future California Secretary of State James Denver. Their guns went off in 1852, and Noy’s careful exploration of the circumstantial folly and political aftermath lend credence to the later adage, “Don’t start what you can’t finish.”

Though dueling was, at least officially, frowned upon by California society and outlawed in most East Coast states at the time, the bloody affair fits into Noy’s larger narrative about the difference between official rules and the raw reality of the West.

“There’s a constant tension here in the 19th century between this kind of anything goes ethos, and the effort to reform and control it. And most of the time, the reform and control just didn’t work,” Noy said. “Human nature doesn’t change much. But at that time in California, the responses to the usual vices were extremely intense, urgent and immediate. Today, we take a bit of a longer view. We work on things a little bit at a time. But in those days, everything was so rapid that solutions often came within a matter of weeks or days, and public opinion could just shift on a dime. It was incredibly turbulent.”

“What everyone did—good, bad or indifferent—it was tied in some way to a kind of vice.”

As with Noy’s previous two books, “Hellacious California!” was published as a joint effort between Heyday Books in Berkeley and Sierra College Press in Rocklin. The former has a reputation for producing gorgeously bound books on California history and environmental topics. The latter is the only full-service community college book publisher in the nation.

Joe Medeiros, editor-in-chief of Sierra College Press, says the partnership has allowed his school to combine its recognized expertise on the history and ecology of the Sierra Nevada with Heyday’s high standards of production and marketing. Noy is a longtime history professor at Sierra College, where Medeiros has worked with him on various projects. The editor said that “Hellacious California!” represents Noy’s most engrossing read yet.

“With this book, I think Gary has really come into his most comfortable self, which is very witty, with a dry sense of humor and a real appreciation of the mavericks of the past,” Medeiros told SN&R. “He does a great job of portraying the colorful history of California … He’s a very fine researcher, so the tales that he tells are all substantiated through very diligent work. But while I think he’s the quintessential researcher, he’s just become really good at spinning yarns.”

For all the lively literary moments in “Hellacious California!” Noy hopes the book will also give readers context for meditating on the Gold Rush forces that ultimately made California so unique.

“The good part of the legacy is that it made this part of the world where we live one of the most ethnically, nationally and culturally diverse places on earth,” he said. “But at the same time, it had also gathered together all of these different groups, who’d brought with them all of their prejudices and hatreds. In the era of the Gold Rush that led to a burst of violence and discrimination, particularly toward the Chinese and the native population. There’s good and bad to this story.”

“Because of the diversity, there was no fixed or entrenched way of doing things, so California has always embraced change from the very beginning.”