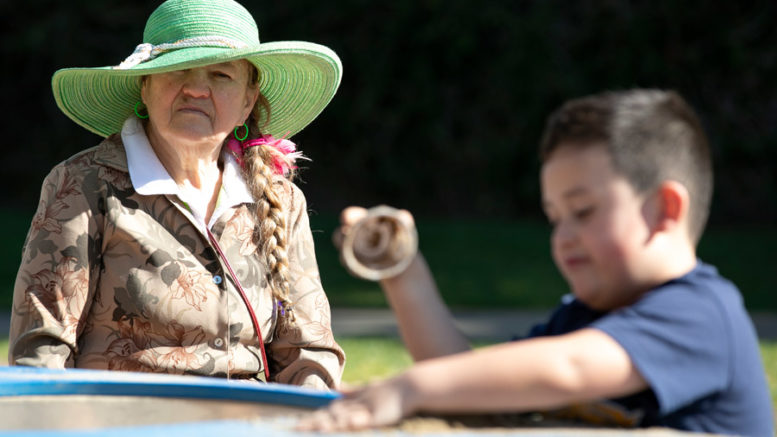 Photo by Anne Wernikoff for CalMatters
Maria Castellanos, 75, cares for her grandson Valentino, 5, amid coronavirus-related school closures in Elk Grove.

“Social distancing.” In this time of coronavirus, it sounds straightforward: Avoid crowds. Don’t shake hands. If you’re 65 or older, isolate yourself at home. If possible, go home and hunker down.

In the complex real lives of California families, however, Gov. Gavin Newsom’s policy advice looked more like Michelle Cescatti in Los Angeles saying no to all comers—canceling her 9-year-old daughter’s homeschool field trips, a Knott’s Berry Farm outing, a bevy of play dates, plans for her father-in-law’s 82nd birthday this weekend.

Or like Meryl Opsal in Pasadena, left without childcare options after her parents—a medical researcher and a physician who had been regularly babysitting for her—self-isolated with the first case of community spread in Southern California.

Or Jeannee Wainscott, a physician assistant in Sacramento who has lined up a mom swap with two other families. Or Linda Le Park, late to her job and scrambling to drop her third-grader with ADHD off at her mother-in-law’s house because classes have been canceled at his school in Elk Grove.

California authorities have rushed to respond as the threat from the coronavirus has exploded into a worldwide public health crisis. With the nation’s largest and most diverse population, biggest economy and longest coastline, the state has been on the pandemic’s front lines.

As of March 16, eight California lives had officially been claimed by COVID-19, the potentially lethal respiratory infection caused by the virus, and tests—which have badly lagged its spread—had diagnosed at least 392 coronavirus cases. College campuses from Sacramento State to the University of California to USC and Stanford had shifted from in-person classes to online instruction, and K-12 schools throughout the state announced closures.

Google sent most of its workforce home with instructions to work remotely. The NCAA men’s and women’s basketball tournaments were canceled. The NBA suspended its season after a player tested positive.

In the strictest measure of its kind yet, San Francisco and six nearby counties issued “shelter in place” orders—directing 6.7 million people to stay in their homes and away from others as much as possible–starting Tuesday and until at least April 7.

State public health officials recommended that communities cancel gatherings with more than 250 people through the end of the month, that smaller events should proceed only if there’s social distancing of 6 feet per person and that gatherings of individuals at higher risk should be limited to no more than 10 people.

In California’s 14 million households, however, the crisis has translated into billions of contingency plans and choices, superimposed overnight on the already complex calculus of work and family. What happens when social distancing means you don’t have child care? What if your germ-carrying preschoolers suddenly pose a lethal threat to their elderly grandparents?

What happens to your teenagers’ future if their education is seriously disrupted? How protected are we if schools cancel class but kids then disperse to malls and movie theaters and bounce houses?

At the micro level, far from the press conferences and epidemiological statistics, the long-term implications are setting in.

For Park, a 40-year-old marketing manager, getting her 9-year-old son Brysen to his grandma’s house has become a two-hour chore, daily. She worries her 12-year-old daughter, Cheilin, who is in 7th grade, is missing crucial instruction. The district, she says, didn’t send schoolwork home to parents because the cancellation was treated as an early spring break. Junior prom, she said, has been canceled, crushing her friends’ teenagers.

But her family has had to improvise, she said, ever since a student tested positive for the virus at the Elk Grove Unified School District, Northern California’s largest. “I guess I feel like the district is overreacting,” Park said. “I think they should just close down the school that was affected—have a cleaning crew go through and disinfect everything. I understand it’s new and it’s kinda scary but they handled it very poorly. The communication was poor.”

Other Californians viewed the virus with far more caution.

“I don’t even want to risk it,” said Lewis, as the L.A. mother of two packed her children off with her mom to the far reaches of Northern California. Her youngest daughter, she said, had spent 10 days in the hospital for respiratory issues when she was younger. Her mother, a retired public health nurse, can’t risk getting sick because she is allergic to antibiotics.

“My husband is out of the country and I’m working full-time,” said Lewis, who works in the television industry. “I feel like we want to be ahead of the curve and not behind it.”

On social media and in chat rooms, parents debated how best to respond to the virus. Some who are moving to isolate or take kids out of school asked not to be named in this story, fearing they’d be accused of being “alarmist.” Others called for pragmatism or community planning.

“We don’t know how long it’s going to be for,” said Wainscott. “It’s better to be proactive and not reactive.”

For some families, forgoing grandparent interaction isn’t an option because they share the same roof. Joy Hepp’s Pasadena area home, for instance, includes herself, her partner, her 3-year-old-preschooler and her mother-in-law, who is on dialysis. Lately, she said, she holds her breath every time her toddler kisses grandma good night.

“I’m just sitting here trying to wrap my mind around if she gets a cold, where do we go and what should I do?”

In Elk Grove, where school had been canceled, grandparents at Kloss Park seconded that emotion.

“I love him and there’s no sacrifice,” 75-year-old Maria Castellanos said, watching her youngest grandchild, 5-year-old Valentino Lopez. In this time of coronavirus, the best bet is precaution, she said, pulling a blue lanyard keychain out of her pocket and dangling it.

“I wash it every time we get home.”