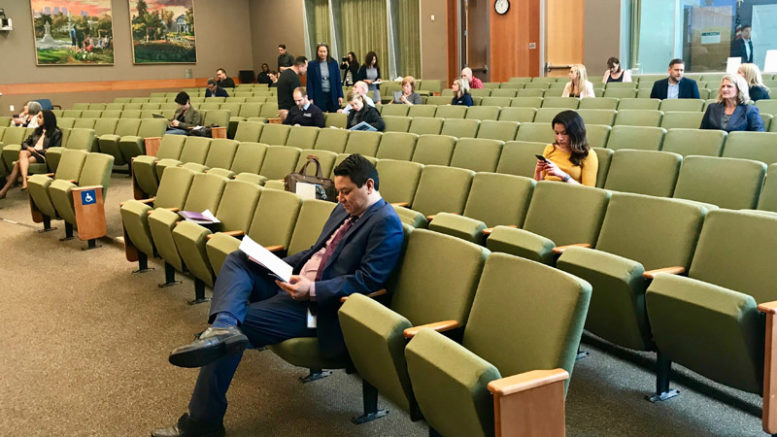 Photo by Scott Thomas Anderson
A small group of reporters had to keep their distance in Sacramento’s City Council chambers as council members weighed their response to the coronavirus.

On March 13, the coronavirus response came to City Hall with the City Council holding an emergency meeting in an empty 300-seat chamber, save for a scattering of 25 journalists wondering just how close they should be to each other.

City officials then wasted no time enacting a number of emergency measures aimed at slowing the spread of COVID-19 and stopping its shadow from bringing working people to their financial knees.

“We’re dealing with unique and extraordinary circumstances,” Mayor Darrell Steinberg said as the meeting started. “We want to prepare to meet this crisis with the urgency it demands.”

First, council members passed a local measure conforming to Gov. Gavin Newsom’s directive urging the cancellation of all public gatherings of more than 250 people in the next 30 days. Up to that moment, the city had some 20 pending permit applications that fell into that category, though more than half had already canceled. The city will be refunding all permit and facility fees.

Next, knowing great numbers of people will be staying at home as much as possible, the city established a $1 million economic relief package for small businesses. It will include a program to issue zero-interest loans for as much as $25,000 for those who have suffered financial harm due to the coronavirus. Steinberg noted the fund will be particularly focused on restaurants, retail stores and daycare providers, which are expected to bear the brunt of a public stay-home movement.

Councilman Steve Hansen, who represents downtown and Midtown, stressed the program might need to be expanded if the situation gets out of control.

“During the last recession this is something that we looked at, so I’m very happy to see us doing this to get ahead of the curve to help these businesses,” Hansen said. “I want to be really clear that I think one of the reasons this is helpful is to not only to protect small businesses that are fragile, but particularly workers that are impacted by this sudden emergency that we find ourselves in. … One million dollars sounds like a lot, but it’s not going to go as far as we’re going to need. … We may need to revisit this in a few weeks to see whether sufficient resources are available.”

It may need to be sooner than that.

“Nobody at all has any illusions about the real economic harm for our businesses and for our workers,” the mayor said. “But our sacrifices will also keep people alive.”

City leaders also agreed to coordinate with the Sacramento Central Labor Council on assisting workers who are impacted by financial earthquakes to come. The labor council will be helping employees navigate issues such as tapping unemployment insurance, paid sick leave and family leave, and workers compensation.

After allocating $250,000 for buying sanitation supplies and hand-washing stations for homeless encampments, the council turned to the issue of passing emergency tenant protections. On March 10, the city of San Jose passed a 30-day moratorium on evictions for people who were behind on rent due to employment issues caused by coronavirus-related disruptions. Other California cities are now scrambling to do the same. Separately, Assemblyman David Chiu of San Francisco has called for a statewide moratorium on evictions, foreclosures and utility shutoffs related to the coronavirus.

However, the Sacramento city attorney’s office informed Steinberg at the meeting that it needed more time to complete its legal research. District 3 Councilman Jeff Harris mentioned he’d received a letter outlining concerns from the Sacramento Association of Realtors about banning evictions. Without elaborating, Harris asked city attorneys to read it while they were finishing their research.

“I think some of them have merit,” Harris said of the realtors’ objections.

Steinberg appeared to brush that off, insisting the council meet again as soon as possible to finalize the moratorium on unfair evictions.

On Monday, Newsom issued an executive order authorizing local governments to halt evictions through at least May 31.

Throughout a portion of the meeting, council members were somewhat distracted by an advocate with the Poor People’s Campaign screaming at them through the chamber windows. Unhappy that only reporters were allowed inside, Kevin Carter shouted: “Everybody matters! Free speech! Free speech!”

After the meeting, Carter told SN&R that he was deeply troubled that the various nonprofits working directly with unhoused and at-risk Sacramentans weren’t in the room and part of the conversation.