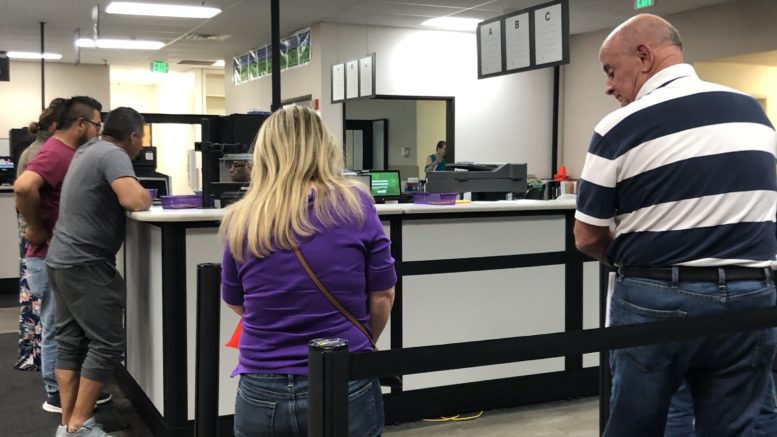 Inside one of the less busy DMV field offices, customers zone out while waiting. (Photo by Raheem Hosseini)

The line stretched to the door. The ragtag hoi polloi shouldered in—9-to-5 business types, teenagers and retirees all waiting to offer tribute to the fickle California Department of Motor Vehicles.

A chipper DMV gatekeeper with a formidable grasp of her department’s broad mandate vetted this initial wave. An 18-year-old applying for his first driver’s license didn’t bring adequate proof of his address and left quietly fuming, his mother telling him there was no point in losing his cool. A laid-back type in shorts and a weather-beaten cap unclenched when he learned he had the right paperwork to transfer title of his mother-in-law’s boat. Others balled their fists and bit their tongues upon hearing they lacked enough alternative identification to obtain a REAL ID—that federally required upgrade every Californian will need if they want to board a plane or enter a federal building after October 2020.

The REAL ID requirement has laid bare the depth of inefficiency and lack of resources at the DMV, whose very name was already synonymous with interminable waits and indifferent customer service.

Because getting the REAL ID requires a physical trip to the DMV, average wait times ballooned last year to nearly three-and-a-half hours at the 20 most impacted offices, according to the state Assembly Committee on Transportation. By the beginning of this year, emergency hires, expanded hours and some technological changes whittled that butt-numbing average to 95 minutes at the busiest offices—57 minutes statewide—but it was one of the DMV’s technological “conveniences” that forced my pilgrimage to the Folsom field office on Oct. 16.

Like tens of thousands of other Californians, I renewed my driver’s license online specifically to avoid a trip to the DMV. Dumb move. Nearly a year later, the DMV has my money and tells me my license is renewed, but never sent me the piece of plastic that proves it.

If your driver’s license expired between January and May of this year, you may be in the same boat. The DMV says it has “resolved” this issue, but I’m still driving around with an expired license more than 11 months later. I wonder how many other people are, too.

The DMV processed 1,132,511 online driver’s license renewals last year. According to media coverage citing the DMV’s own figures, approximately 150,000 customers who renewed online or by mail between September 2018 and early February 2019 were waiting on licenses or identification cards for which they had already paid.

That means the DMV accepted at least $5.4 million for services not promptly rendered.

At the time of the reports in February, the DMV said its employees worked through the weekend to process two-thirds of the delayed IDs, and expected to push through the remaining 50,000 within days. The department also created an online form for affected customers to alert them.

I filled out that form—twice. I still don’t have my license.

I asked the DMV’s Office of Public Affairs how many others are in the same predicament. Department spokesman Jaime Garza said in an email that 31,347 customers filled out the online form saying they never got their IDs. Garza added that the DMV has made everyone whole by now, mailing IDs to all 150,000 of us.

So why am I still driving with an expired license?

I, for one, was struck by how much of my existence relied on this little card.

Filing my taxes proved tricky. Selling my house became a crucible. Checking in for press events required uncomfortable amounts of schmoozing. Worst of all, bar bouncers turned me away! It didn’t matter that I’m 39 and have the silver streaks to prove it; when common sense is endangered and your explanation starts with, “You didn’t happen to see the news …” it just sounds made up.

My world got smaller. The experience felt Kafkaesque in such a boring way. Thanks to the DMV’s legendary ineptness and automated bureaucracy, I was the gradually disappearing California man.

At the Folsom office, I explained my dilemma. The DMV greeter looked neither surprised nor unsympathetic. She issued me a number and told me to fill out yet another online form at one of the computer consoles. More than 90 minutes later, I told my story again.

I was issued a temporary paper license for my trouble. The real thing arrived in the mail on Oct. 28, about two weeks later. After 11 months and change, I got the thing I paid for. If renewing my vintage ID is this tough, I can only imagine what getting a REAL ID will be like.

Be the first to comment on "Welcome to DMV purgatory"