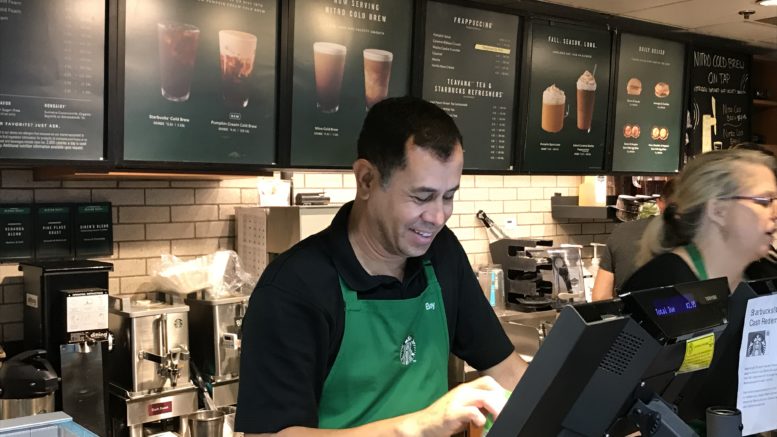 Eloy Sanchez says he knows about 80% of the regular customers he serves at a Starbucks in Midtown. (Photo by Foon Rhee)

Coffee shops are part of our minimum-wage economy

Do you ever wonder how often your favorite barista can afford that large pumpkin spice latte with an extra shot that you just ordered?

The average pay for baristas in California is slightly more than $13 an hour, according to Indeed. While that’s about 20% higher than the national average, it’s barely above the state minimum wage of $12 per hour (that increases to $13 on Jan. 1).

So if a barista is getting a full 40 hours a week—and not everyone is—that’s about $27,000 a year. And if they’re the only one working in a family of four, that’s not much over the official poverty line of $25,750 a year.

Baristas also get an average of $18 in tips a day, according to Indeed. Add that to the average wage, and the hourly total barely tops California’s “living wage” for a single person and is only half the living wage for a single parent with one child of $30 an hour. That doesn’t leave a whole lot for $5 lattes.

Still, it could be worse.

California is tied for the second highest minimum wage in the country, while 15 states follow the federal minimum of $7.25 an hour and five don’t have a minimum at all. Baristas would be big beneficiaries of the national Fight for $15 movement.

And significantly, unlike in 42 states, there isn’t a lower minimum wage in California for employees who receive more than $30 a month in tips. In some states, that includes baristas, as well as waiters and bartenders. That lower wage for tipped employees puts more workers into poverty, the Economic Policy Institute points out, and also worsens racial and gender gaps in pay since minorities and women are overrepresented in these jobs.

Still, the cost of living is much higher in California, especially for housing. So many baristas, just like others who work in retail and service jobs, are caught in the affordable housing crunch.

I talked about all this to Eloy Sanchez, who usually gives me my large coffee at a Midtown Starbucks as I head to the office in the morning.

Sanchez, 47, said that most of his fellow baristas don’t get a full 40 hours a week and that the going rate of $14 an hour is not enough for them to live on, especially if they have kids. So many have second jobs.

He said he works about 26 hours a week and chooses not to be a supervisor, giving him flexible hours and leaving a lot of time for bike rides and other outdoor pursuits.

“I make enough for myself,” Sanchez told me, because of his seniority after 13 years with Starbucks and because he doesn’t have children. If he did, he said, it would be “a whole different story.”

Starbucks—which has nearly 14,300 locations in the U.S., including more than 2,000 in California—does offer health care, a 401(k) savings plan with company match, discounted stock purchases and tuition assistance. Many independent and smaller coffee houses can’t afford to be as generous with benefits.

This issue features the craft coffee boom in Sacramento, another way the region is becoming more cosmopolitan. But don’t forget all the people serving us those lattes. You might even want to put a little something in the tip jar.

Be the first to comment on "Editor’s note: Barista blues"