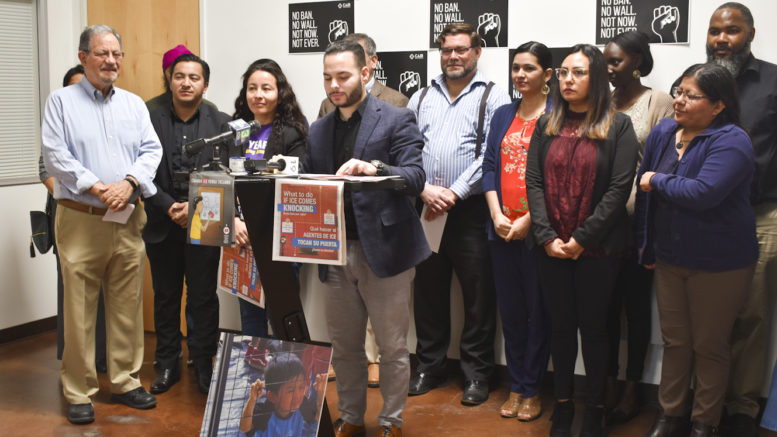 Community organizations gather at the office of CAIR in North Sacramento to announce their new project, "When ICE Comes Knocking." Photo by Elisabeth Bayard-Arthur

A broad coalition of nonprofits and labor groups recently unveiled a new tool for shielding local immigrant families from being separated by the Department of Homeland Security.

The strategy involves widely distributing bilingual guides and pictorial pamphlets across three counties, ones that explain the rights every undocumented person has under U.S. law. According to the Sacramento Immigration Coalition, the coordinator of the effort, at the heart of these publications are real human stories about coming into contact with U.S. Immigration and Customs Enforcement, or ICE.

The announcement about this outreach happened March 18 at the Sacramento office of the Council on American-Islamic Relations, or CAIR. That group, Sacramento Area Congregations Together and others are forming a multi-organizational phalanx to distribute the information to immigrant families.

On March 19, word of the press conference put Fox News contributor Jedediah Bila in a taut fury as he decried the publications on what is said to be President Donald Trump’s favorite morning show, Fox & Friends. Bila and Tom Homan claimed that the Sacramento effort was inspiring “lawlessness,” especially among children. Before the day was over, The Huffington Post wrote a story countering that claim and pointed out that the publications specifically instruct children not to lie to authorities.

Indeed, the dual publications, called “What to do if ICE Comes Knocking,” are far from lawless, as they are aimed at educating undocumented people on their legal rights. They handle questions like what to do if an ICE agent stops a person on the street, or knocks on the door of that person’s house, or tries to interfere in their employment. Those questions are all answered by retelling true stories that have happened in Sacramento County. The pictorial guide conveys similar information in a comic book form.

“These are two publications that will really help families stay safe from the dangers of ICE,” said Mahmoud Zahriya, a policy and advocacy specialist for CAIR.

The guides were sponsored by Communities for a New California, the California Endowment, the ACLU and the League of United Latin American Citizens. Their content was created with help from the Independent Journalism Fund and published by N&R Publications. So far, 65,000 copies have been distributed in Sacramento and Yolo counties via inserts in SN&R. Another 25,000 copies are to be circulated by hand.

The coalition is now focused on distributing the guides at schools, churches and job sites. One person who’s been helping is Rosario Ramirez, a coordinator for SEIU. She said the message she’s trying to get out is simple: “When ICE comes to your house, you have rights.”