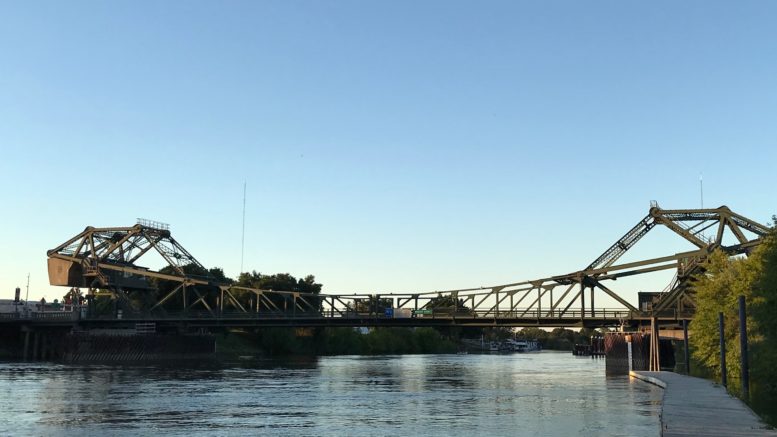 Walnut Grove's volunteer firefighters would be on the frontlines of any major explosion. Photo by Scott Thomas Anderson.

Seventeen bodies were hauled out of the tunnel, some charred by fire, others choked in soot.

The men killed that day in the Los Angeles neighborhood of Sylmar in 1971 were burrowing through the earth on behalf of the Metropolitan Water District, a public utility district servicing Anaheim, Long Beach, Los Angeles and San Fernando. The workers under the agency’s direction accidentally hit a pocket of gas. The ensuing fireball was something they never saw coming.

Now, with Metropolitan Water District being the major player funding Gov. Jerry Brown’s embattled vision of two parallel tunnels cutting 30 miles underground, planning documents reveal the mammoth undertaking will include tunneling and drilling through a region of the Delta packed with underground gas wells. That’s left people living on the estuary’s islands worried about a repeat of that deadly day in Sylmar.

“It’s so blatantly clear that this is a threat to the people of the Delta,” said Barbara Daly of North Delta CARES, a nonprofit advocating for residents from Freeport to Isleton. “Each of our little legacy towns has a volunteer fire department, and they’ll be put right on the front lines if there’s an explosion or catastrophe.”

If Delta homeowners want to raise that fear in court—adding to the myriad of lawsuits already pending against the tunnels—they might not get that chance. That’s because a Southern California congressman keeps trying to insert an unprecedented ban on lawsuits against the twin tunnels project into the latest federal appropriations bill in Washington, D.C.

CARES invoked Sylmar’s tunneling tragedy this month while challenging the Metropolitan Water District’s vote to commit $11 billion in funding to the tunnels.

While experts have long feuded over whether the tunnels will cause ecological collapse or habitat restoration, CARES and a number of scientific experts are arguing that Brown’s administration and allied utility districts have paid virtually no attention to the peril of digging so near the gas wells.

CARES recently provided the Metropolitan Water District’s board of directors with an updated map from the California Department of Conservation that documents at least 27 known gas wells directly in the path of the WaterFix’s 40-foot, 35-mile-long tunnels.

“Although it is true there are gas fields located in areas in the Delta, the tunnels themselves will be passing approximately 1,000 to 2,000 feet above the active and inactive gas fields,” Bednarski wrote. “Geotechnical data collected shows no indication that there is actually gas deposits at the depth that the CA WaterFix tunnels will be constructed at, 100 to 150-feet below ground surface.”

Yet Bednarski’s report does allude to the unknown variables that are troubling both Delta residents and independent scientists.

“The current tunnel alignments avoid all active gas wells. The location of the abandoned wells, some of which were abandoned many decades ago, is less obvious,” Bednarski wrote. “Some abandoned wells show up on historical photos of the Delta, some do not.”

Bednarski wrote that the California Department of Water Resources will handle that challenge by conducting “specialized studies” down the road, though he never elaborated on the nature of those studies.

Experts who don’t work under the Brown administration have multiple concerns about tunneling around the gas wells.

Dr. Robert Pyke, a geotechnical engineer who’s studied the Delta for years and previously worked as a consultant on Chevron drilling projects, says that residents who live near the path of the tunnels have a legitimate reason to worry.

“I think it’s a real issue,” Pyke said of the gas wells. “Whenever you have natural gas deposits, even though they have something in the ground that’s holding them in place, usually cap rock, there’s always leakage. There can be gas in the shallow sediment; and with a project like these tunnels, you have equipment that can generate a spark.”

Pyke also sees a secondary danger that comes with disturbing gas fields, one he says is illustrated by an accident that happened on McDonald Island in the Delta in 1982. In that incident, the operation of an underground gas field is believed to have led to the reforming of local fault lines, which then caused a levee collapse, flooding the island.

McDonald Island happens to be one slough away from where the twin tunnels will be burrowing, and the PG&E gas plant on it was experiencing mysterious gas leaks just two years ago.

Pyke says that despite the state’s assurances, there are established risk factors that simply aren’t being considered by Metropolitan and the Department of Water Resources.

“Any time you’re operating a gas field, or even just the withdrawal of gas, it will cause resettlement in the ground,” Pyke explained. “The bigger problem is the Department of Water Resources doesn’t even have the basic geological and geotechnical data to write a proper environmental impact report—they don’t have the basic data to even make decisions.”

Deirdre Des Jardins, an expert on computer modeling who’s previously worked for NASA and Los Alamos National Labs, has raised similar concerns, both about the danger of the gas wells and about DWR’s handling of the tunnels’ environmental impact report.

The Department of Water Resources did not respond to these criticisms of its EIR data by independent experts.

Given how fiercely the science around the tunnels is debated, Delta communities were stunned last month when Republican congressman Ken Calvert of Corona added a rider to the Interior, Environmental and Related Agencies Act that would effectively ban lawsuits against and judicial oversight of WaterFix. One person who thinks the rider could have broader implications for environmental protection in California is Mark Pruner, a Delta-based attorney who’s specialized in land use litigation for 34 years.

“It’s very unusual,” Pruner said. “This rider is not clarifying the law, it’s saying the judiciary is frozen out entirely of executing its constitutional duty—so that makes it different.”

Pruner added, “One possibility is that it could set a precedent for cutting out judicial review on other land use concerns.”

But Calvert told SN&R that there’s nothing alarming about his move to finally get the tunnels to break ground.

“Few infrastructure projects in the history of our nation have gone through as much scrutiny as the California Water Fix,” Calvert wrote in an email. “All of the project’s stakeholders have had a plethora of opportunities to express their thoughts and concerns. … And now we must move forward with the project.”

For Barbara Barrigan-Parrilla, executive director of Restore the Delta, that’s a preposterous claim to make about a project that only has 10 percent of its design completed and hasn’t been issued the majority of its permits.

“They’re just trying to rewrite the rules without any regard for peoples’ civil rights or the constitutional rights of Californians,” she said, “or the rights of any Americans for that matter.”

Be the first to comment on "Fire down below: Records reveal nearly 30 gas wells in the path of Delta tunnel project"