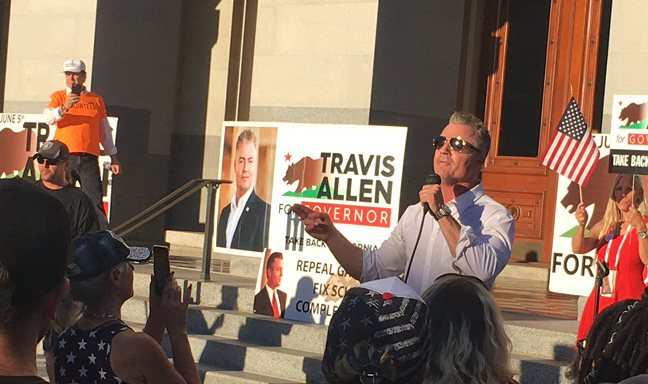 “I am so much like Donald Trump, it’s scary.”

Paul Taylor, long-shot Republican candidate for the U.S. Senate, was on the west steps of the Capitol working the crowd when I overheard this. I’m certain he didn’t mean it the way you might take it.

Taylor was in Sacramento Sunday evening to introduce his ally, gubernatorial candidate Travis Allen, at a Take Back California campaign rally. There is actually nothing scary about Taylor, a deeply religious man who led the prayer at the beginning of the rally. Allen is another story.

Picture Donald Trump 20 years younger, twice as angry, a full step further to the right, trim as an athlete and (almost) as good looking as Gavin Newsom. That is Travis Allen, the Huntington Beach Republican whose campaign has inflamed Trump’s California.

I left yesterday’s rally thinking this man might actually beat the odds and take second place in tomorrow’s top-two primary. Allen made it impossible not to think that way, pointing out, over and over, that about two years ago, the man he calls a hero defied the odds and took the first big step that led him to the White House.

Twenty-four hours later, as I write this, I feel sure that Travis Allen, a proud Neanderthal conservative, is never going to become the governor of California. But the thought still makes the hair stand up on the back of my neck.

From the moment he arrived, peeling off his jacket, donning his aviator shades, flexing his smirk/grin/grimace, and shouting violently into the microphone, the crowd around me was on the balls of their feet, responding to every one of his prompts with mirrored rage.

Shameless, yes. Juvenile, certainly. What is this, a mean football coach at a high-school pep rally in hell?

Well… It was effective.

“I believe in fighting, but when you fight, you fight to win! And I can tell you right now we will win in California!”

It’s not what he was saying, but how he was saying it. This was the sound of anger and something else: power. Travis Allen is California’s voice of white power.

Allen spent the first part of his speech attacking his Republican opponent, John Cox. He pointed out some facts that the crowd seemed to find offensive: John Cox is from Chicago—a huge sin in Travis Allen’s nativist California. Cox is a perennial candidate, having run quixotic losing campaigns for president, the U.S. Senate, the House of Representatives and … Cook County Clerk and Recorder.

One problem: Pres. Trump has endorsed Cox, not Allen.

West Walker, co-founder of California for Trump, who emceed the event, explained this.

“You can’t really blame Trump,” Walker said. “He has spies. He has swamp creatures. He has RINOs all around him.

“This is all a McCarthy thing,” he continued, referencing the U.S. House Majority Leader Kevin McCarthy.

“I met John Cox, and interviewed him, and I had to stand back. Just like this building [pointing to the Capitol], he stinks inside. I’ve never smelled a RINO’s insides, but let me tell you, John Cox stinks.”

Like Trump, Allen is managing to hold onto the evangelical vote. Paul Taylor, in his introduction, invoked the Creator.

“I created the Golden State Coalition because God put the dream in me, and said, ‘I want you to build a pool of truly conservative leaders.’ I said, ‘That’s cool, but I am not going to pick ’em. You tell me.’ And he sent me Travis Allen!”

A bit later, I was surprised to see Stevante Clark approach the stage, stunned to hear him introduced as a speaker, and shocked that emcee Walker introduced him as Stephon Clark—invoking the name of Stevante’s slain brother, who was shot by police officers in March.

“We have a state of emergency here,” Clark said. “You understand that, right? Jerry Brown is dead. … I’d rather you vote for a kooky Republican than a D.C. Democrat. You can take that whatever way you like.”

Allen’s number one issue is, of course, immigration.

“In my first 100 days as governor of California, we will reverse the sanctuary state law!” he said. “When I am governor, only citizens will vote because we will have a voter ID! And yes, we will build that wall!

“We will prosecute Xavier Becerra for obstruction of justice! And you’d better bet the mayor of Oakland, Libby Schaaf, will face the music!”

Reading these words on the page, the speech doesn’t sound menacing. Witnessing them in real life was a little bit terrifying. Maybe it was the crowd’s primal roar punctuating each sentence.

Like Trump, Allen rewarded his listeners for sharing their rage with outlandish promises.

“We will bring back the timber industry in the north! In gold country, we’re going to see mining. The Central Valley will have water! Both offshore and on, we will have oil!!”

Looking through my notes, without the hysterical pitch, Allen’s speech reads like the quaint fantasy of a retrograde right-winger. Leftist propaganda in schools. Every child getting a trophy. Mandatory vaccines. Make “knowing transmission of HIV/AIDS” a felony. Reverse prison reform. Ho-hum.

There is one thing in here that brings back the fears: Allen crunches the numbers this way: In 2014, Jerry Brown received 4.3 million votes. In 2016, Donald Trump received 4.4 million votes in California. “All we need to do is get the Trump voters,” Allen barks through a sneer.

I realize it’s irrational: Still, I’m afraid of this man.