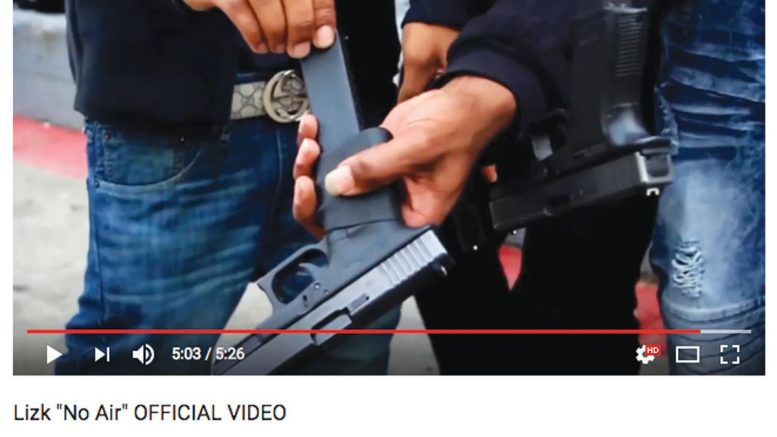 Deandre Rogers doesn’t deny he’s a gang member. But the idea that he was cruising through Sacramento with high-powered, automatic weapons at the very moment his music videos were threatening rival street factions is a charge the performer does deny.

Last week, a jury was asked to consider Rogers’ fate by weighing everything from recent shootings to the success of Marvel’s Black Panther soundtrack.

Rogers, better known by his rap moniker Lizk, faces two counts of being a felon in possession of a firearm, along with special gang enhancements.

One of the main witnesses in his trial was Sacramento County sheriff’s gang Detective Kenny Shelton. On February 28, The investigator testified that Rogers, who belongs to the Franklin Boulevard-area gang G Mobb, was already on probation for carrying a concealed weapon when, in winter 2016, he started releasing gun-toting rap videos on YouTube that challenged gang rivals. In November of that year, Rogers dropped a video called “Double Bazk On,” in which he called out Oak Park-affiliated rapper Mozzy.

Shelton testified that the sheriff’s gang unit was already planning to locate Rogers through his GPS ankle monitor and search him when, on December 14, a new Lizk video hit Youtube. In “No Air,” Rogers can be seen flashing guns numerous times. In Shelton’s analysis, Rogers was escalating tensions between G Mobb and the Oak Park Bloods.

“No Air” posted just 24 hours before YEET Day, an annual remembrance of slain G Mobb figure Marvion Barksdale. Barksdale was killed in 2010 during an infamous barbershop shootout on Stockton Boulevard that also took the life of a bystander, Monique Nelson, who was shielding her 2-year-old son from flying bullets. It’s a day when gang tensions run high on the streets of south Sacramento.

Shelton testified that his team accelerated plans to search Rogers after seeing his newest challenge to Oak Park gangsters. Shelton added there was “an active gang war” happening at the time. Between February and December of 2016, south Sacramento experienced numerous drive-by shootings, which took the lives of at least five people and left at least 12 others hospitalized.

Detectives used Rogers’ ankle monitor to track him to a sushi restaurant on Howe Avenue, where he was having dinner with a group of people.

Shelton testified that, while conducting surveillance in the restaurant’s parking lot, he spotted Rogers walk over and talk to someone through the open window of a Nissan Infiniti. Not long after, Rogers left the scene with two women in a Mercedes. Shelton and other undercover deputies quickly pulled the Mercedes over and found a loaded Glock 21 .45-caliber with a “thirty stick” extended magazine. Returning to the Infiniti, they found a loaded Glock 27 .40-caliber pistol that was illegally modified to be fully automatic.

Rogers told SN&R in a jail interview—and continues to maintain—that the guns weren’t his.

“If I was anybody else, I wouldn’t be in here for this,” he said from jail. “With the gang enhancement, it makes it violent. They’re trying to strike me out on a gang charge.”

During cross-examination, Rogers’ defense attorney Jessica Graves attacked the prosecution’s case by pointing out that detectives hadn’t considered whether the guns belonged to anyone else. “They started their investigation with the presumption he was guilty,” Graves later stressed to the jury.

Graves also attacked the prosecution’s portrayal of Rogers as a would-be killer, some of which was conveyed by playing the “No Air” video in the courtroom.

“You gave us your interpretation of what these lyrics mean, but that’s based on your experience and your best guess of what Mr. Rogers meant when he wrote these lyrics?” Graves asked Shelton. The detective acknowledged that was true. “You could be wrong about what some of lyrics mean?” Graves went on.

“Some,” Shelton said. “But some are pretty clear.”

Graves then questioned whether the violent threats and gang symbols in Rogers’ video could be more of a persona than a reality. She asked Shelton if he’d seen the movie Scarface. The detective answered he had. Graves asked if, by appearing in film, that meant Al Pacino goes around selling cocaine and firing machine guns.

But Deputy District Attorney Kristen Andersen did her best to prove Rogers is a “high-ranking” gang member with blood on his hands. She argued that one of the two guns in question—the 9-millimeter with “the 30 stick”—can clearly be seen in the video for “No Air.” Anderson also played recordings of jail phone calls Rogers made, which the prosecutor argued show him pressuring the women in the Mercedes with him to take the fall for the guns. At one point in the recordings, Rogers appears to brag about his ability to communicate with the outside world while being monitored. “I done said some hot shit in code,” he confides.

In a different recording, validated G Mobb member Jahmal Dawson can be heard trying to talk one of the women from the Mercedes into claiming the guns. “We don’t get made like regular people,” Dawson tells her. “We do other things, you feel me?”

In her closing arguments, Graves told the jury not to mistake Rogers’ musical ambitions for proof of genuine guilt.

“Mozzy makes these same videos,” she said, adding that Rogers’ rival is currently featured on the soundtrack for the $700 million-plus grossing film Black Panther. “Mozzy was able to use his status as a rapper and gang member in Sacramento to catapult himself to worldwide popularity.”

Andersen, for her part, tried to steer the focus back to real-world tragedies.

“Hopefully this is the last time you’ll have to hear about what’s happening in Sacramento County—the violence, the murders, the assaults,” she told the jurors. “This is not a persona; this is Mr. Rogers’ life.”

On March 2, the jury convicted Rogers of being a felon in possession of a firearm, and doing so for the benefit of a gang. He’ll be sentenced in April.

Be the first to comment on "Loaded lyrics: Trial of rapper Lizk centers on soundtrack to area gang war"