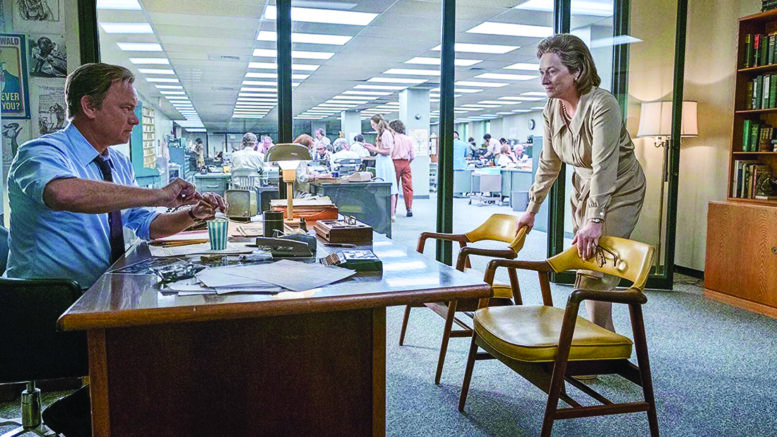 In the landmark Supreme Court decision supporting journalistic freedom in 1971, Justice Hugo L. Black wrote: “Only a free and unrestrained press can effectively expose deception in government … In revealing the workings of government that led to the Vietnam war, the newspapers nobly did precisely that which the founders hoped and trusted they would do.”

I encourage you to see Steven Spielberg’s movie, The Post, which tells the story of how Washington Post editor Ben Bradlee, played by Tom Hanks, and Post owner Katharine Graham, played by Meryl Streep, faced possible criminal penalties for defying a court order and publishing the Pentagon Papers. These top-secret documents revealed much that was previously unknown about the history of the Vietnam War, and made it clear that American presidents and numerous officials had repeatedly lied to the public about the war.

This war, which lasted two decades, resulted in the deaths of as many as 3 million Vietnamese, Laotians and Cambodians and close to 60,000 Americans. The Pentagon Papers revealed that this war did not need to be fought, could not be won and was allowed to continue mainly because government leaders did not want to be the ones who lost the war. Instead, these leaders squandered American and Vietnamese lives needlessly. If Americans had been told the truth about the Vietnam War, the war would certainly have ended much sooner.

The movie focuses on Katharine Graham, who took over the company she inherited from her father after her husband’s suicide. She is deciding what to do about the Pentagon Papers at the same time that she is taking her company public. This story deals with the intersection of the business of journalism and the reporting of news. It is also the story of a woman in leadership at a time when almost every room she walked into was a room full of men.

Her male financial advisers were strongly opposed to the publishing of the Pentagon Papers because of the possible financial impact to the company. They were afraid to defy the government because it meant potentially losing the newspaper.

Graham bravely chose to publish. And things worked out well. The Supreme Court ruled six to three in the newspaper’s favor. The Post later distinguished itself with its coverage of Watergate, which led to President Richard Nixon’s resignation.

While, in my 44 years of publishing, I have never had a story like the Pentagon Papers, I do know that taking on powerful interests is dangerous. In the media world, there are numerous and repeated examples of companies lost and careers destroyed by doing excellent, important journalism. Graham made this risky decision without knowing what the consequences would be. History proved her right. But things could have very easily gone another way. The outcome was not obvious.

Similarly, it is not obvious what is happening with journalism today. I wish I could see the future, but it is hazy.

Of course, the internet has dramatically changed the business of newspapers and of journalism—but not in the way that we first anticipated. In 2000, it was believed that newspapers could receive enough online revenue to support their news operations, while eliminating the cost of printing and distribution. Since most newspapers spent only 10 percent of their revenue on editorial, it seemed that it would be easy to support journalism through internet advertising. Many newspapers moved quickly in this direction.

At the dawn of the new millennium, media companies made money online by displaying banner ads and counting how many people saw them. The cost-per-thousand impressions (CPM) averaged $10-15 back then, a price that was predicted to double. With three to 15 ads on a page, that could result in as much as $4,500—and with that kind of revenue, online journalism would be sustainable.

But very quickly, it became apparent that this would not be. In 2000, Google, then two-years old, introduced Ad Words, and online advertising as we now know it took off.

The market was quickly dominated by a few internet giants. Today, Google and Facebook take in more than 60 percent of all online advertising dollars, while most media companies are lucky to get a CPM of $4.

Even now that it’s clear that online revenue cannot support journalism, most newspapers have refused to face this reality. They have continued to focus on online content, with very little financial return. The end result is that many large newspaper chains are insolvent. The Chicago Tribune has declared bankruptcy. MediaNews Group, which owns the Denver Post and San Jose Mercury News, was not able to make its loan payments and was taken over by creditors including a hedge fund firm, and renamed Digital First Media. The Sacramento-based McClatchy Corporation, which owns 29 other newspapers, has lost over 2 billion dollars in stockholder equity, and its stock price is only a small percentage of what it once was.

On January 12, McClatchy Corporation announced that the Sacramento Bee and five other McClatchy papers would be overseen by a new regional editor, 37-year-old Lauren Gustus. Where prior Bee editors from C.K. McClatchy to Joyce Terhaar all had significant journalism credentials, Gustus, previously executive editor of the Fort Collins Coloradoan, was hired for her digital expertise. She will now be overseeing six newspapers. I suspect that upon this announcement, C.K. rolled over in his grave.

At the News & Review, our print product produces the revenue that supports our journalism. We post our stories a day after our paper comes out because we want people to read the paper and to see the ads that support our journalism. Our print advertising, which reaches more than 300,000 readers in the Sacramento region, is an evermore affordable and effective way for local businesses to reach customers. Print advertising continues to be seen as useful content, as web advertising is seen as more intrusive and annoying.

Another current shift that will likely have a major impact upon media is the increased appreciation of vetted information as compared to unvetted information. Several years ago, many thought that citizen journalists would replace professional journalists, and amateur videos would provide content for YouTube and other internet outlets. There would not only be cost savings. There would be more freedom and more diverse views.

Those ideas are now being rethought. In the last several weeks, Huffington Post, which built up its website with 100,000 non-paid writers who self-published their stories and opinions, announced that they were dissolving the self-publishing platform. HuffPost’s editor-in-chief was quoted in the New York Times saying that unfiltered platforms had devolved into “cacophonous, messy, hard-to-hear places where voices get drowned out and where the loudest shouting voice prevails.”

Google recently announced that it is hiring 10,000 people this year to oversee content that violates its policies after advertisers started dropping out because they did not want to be seen next to offensive content. Google’s YouTube division is removing ads from many videos, and pledging to review “every second” of the most popular videos which are eligible for ad placement.

And last fall, Facebook’s Mark Zuckerburg offered a Yom Kippur message, stating that “For the ways my work was used to divide people rather than bring us together, I ask forgiveness and I will work to do better.”

The changes at Facebook, Google, YouTube and HuffPost clearly indicate that there is a major rethinking of social media and the impact of unfiltered and unverified information. This rethinking will naturally impact journalism.

And the cost of vetting information through professional journalists is nothing compared to the consequences of using inaccurate information. Ask the millions of people in their graves who died needlessly in Vietnam. They paid the price.

I read the Wall Street Journal and the New York Times, and I still read the Sacramento Bee practically every day. If you are interested in what’s going on in the local community, you have to read the Bee. Yes, it used to be better—but The Bee still provides essential information that you cannot find anywhere else. I sincerely hope it survives.

The Post demonstrated the power of journalism, as well as the difficulties and complexities of running a business that provides journalism. Now, more than ever, we need to figure out a way to support the business of journalism.