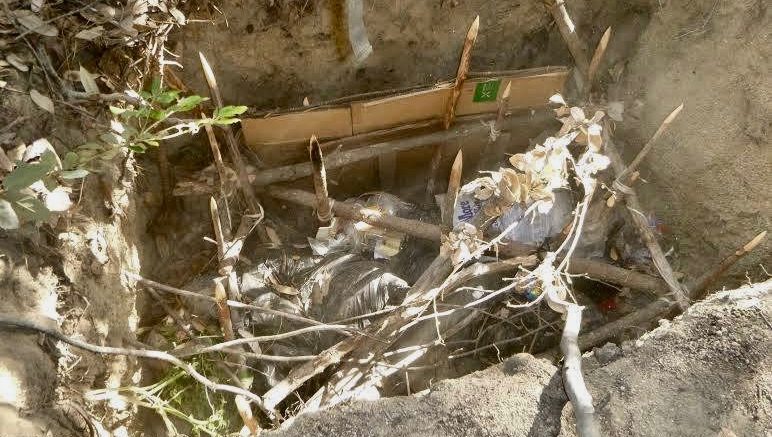 John Nores hunched over his partner, who had just been shot through both legs with an assault rifle. A few feet away, a marijuana grower linked to organized crime lay dead in the bushes. Another grower who’d leveled a gun at Nores was now bolting away from the drifting smoke.

Waiting to see if a helicopter would arrive before his partner bled out, Nores, a state game warden, mentally inventoried his surroundings: Just ahead, 23,000 marijuana plants cut a swath through the Sierra Azul Preserve, a rolling hideaway above Los Gatos swept in old coast oaks, high, glistening brome and pools of wood mint and elks clover. Much of that beauty had been razed to make way for endless rows of pale green stalks.

It was August 2005. Scenes like this one were beginning to play out across California’s public lands: The mass clear-cutting of trees, the full-scale terracing of hillsides, herbicides and rodenticides seeping into groundwater, makeshift landfills torn through the soil, and shell casings and empty propane tanks littering the habitat. And then there were the poisoned animals, the ones that gradually died as their organs burned from within.

As California’s marijuana black market surged to billion-dollar profits, it left behind dead bodies and deep scars in the landscape. For Nores, who still works for the since-renamed California Department of Fish and Wildlife, the fact that his partner lived didn’t change the reality: Flying bullets meant the game was changing.

“Our wardens have been in four more gunfights with cartel members in grows since that shootout,” Nores said in a recent interview. “In terms of the threat to public lands, at this point there are 3,000 to 4,000 clandestine cartel grows in California in any given year. … Right now we’re able to clean up and restore about 44 percent of the grows we go into.”

Yet the cartels’ commerce is about to compete head-on with the Golden State’s new legal, licensed and regulated cannabis industry. According to some experts, mainstream marijuana could help provide the revenue streams to take California’s public lands back for the public—but only if the new presidential administration doesn’t overrule the state.

For Stephen Frick, assistant special agent in charge of U.S. Forest Service Law Enforcement & Investigations, a macabre picture helps sum up what his teams continue to find in California’s pristine landscapes: It’s the recent image of a federal biologist standing over the carcasses of a gray fox and turkey vulture. The fox died first, from direct poisoning, before the vulture collapsed while picking off its remains. As the biologist looked down, he noticed flies were dying once they crawled on the fox’s putrid flesh.

“That’s how toxic the blood poisoning was,” Frick said.

Among the liquid nightmares Frick’s enforcement officers keep discovering is Carbofuran, an agent so noxious it’s been banned by the Environmental Protection Agency since 2010. But outlaw growers from Mexico still have access to Carbofuran and use it often for their megacrops. Frick said that a quarter of a teaspoon can kill a 300-pound black bear. That’s why his special agents can now scroll through a carousel of snuff images on their cellphones: poisoned bears, poisoned mountain lions, poisoned mule deer and poisoned foxes—all stiff and strewn across the beauty of the national forests. The Pacific fisher, a whiskered, cub-faced member of the weasel family, is one of the threatened species increasingly being killed by Carbofuran.

“Five years ago, we started seeing a whole lot of dead animals at these sites,” Frick recalled.

Even more costly is trying to reverse the direct devastation to habitat. Reforesting stripped lands and cleaning contaminated soil results in huge price tags. Given that some cartel grows contain not only armed guards, but also covered traps that include spike-laden punji pits, keeping hikers, campers and anglers safe remains the priority. Frick said it’s hard enough for federal authorities to reclaim areas with their limited funds, let alone engage in large-scale restoration. In fact, last year, that challenge only intensified.

“In 2016, we saw a 50 percent increase in the number of plants on public lands from the year before, and 75 percent of those had dangerous pesticides,” Frick observed. “We give the problem all the attention we can, but like every agency in the U.S., we’re short-handed.”

Department of Fish & Wildlife wardens reported locating roughly half a million marijuana plants on the state’s public lands last year. The U.S. Forest Service documented 1.4 million plants in the same window. Yet, as bad as that year was, both agencies have reason to hope 2018 may see gradual improvement.

That’s when California’s legal marijuana growers indirectly join the battle against illegal ones by paying hundreds of millions of dollars, by most estimates, into the state’s coffers thanks to Proposition 64. Some 20 percent of the state’s new marijuana cultivation and excise tax is slated for environmental protection. California’s DFW and state park officials will control how the funds are deployed.

So far, only a handful of local governments are sanctioning, regulating and taxing marijuana cultivation—though the ones that are have new local-level firepower for code and law enforcement operations. Among them is Mendocino County. Case logs from the U.S. Attorney’s Office show that illicit grows inflicted major environmental damage in the Mendocino National Forest over the last three years. With county officials now collecting fees and a tax, Mendocino has made safeguarding its habitats one of four priorities for spending the new money.

“Now the sheriff’s office should be having more time to actually work on those big trespass grows,” said Mendocino County CEO Carmel Angelo.

But there remains a glaring threat to such state and local plans. In February, newly confirmed U.S. Attorney General Jeff Sessions issued a warning of unspecified nature regarding those states allowing recreational marijuana use. Local and state officials who are deep in the fight for environmental protection are still hoping California’s sovereignty wins out.

That said, some working in the emerging marijuana industry recognize the new tax streams alone may not be enough to return public lands to their natural states. Knowing the scope of the problem, a group of cannabis business owners have formed Restore California, an organization seeking nonprofit status to work on environmental protection.

Restore California plans on hosting ongoing fundraisers within the industry to raise money for DFW’s Marijuana Enforcement Team. Restore’s president, Melissa Sanchez, is an attorney who’s worked with medical marijuana growers since 2009. Sanchez told the News & Review that the group’s mission is to give legal growers an easy way to prove their commitment to conservation.

“This allows people in the regulated industry to separate themselves as legitimate growers from people who are criminals growing on public and private lands,” Sanchez stressed. “What better way to do that than by taking a stand for the environment?”

Be the first to comment on "Out of the dark"