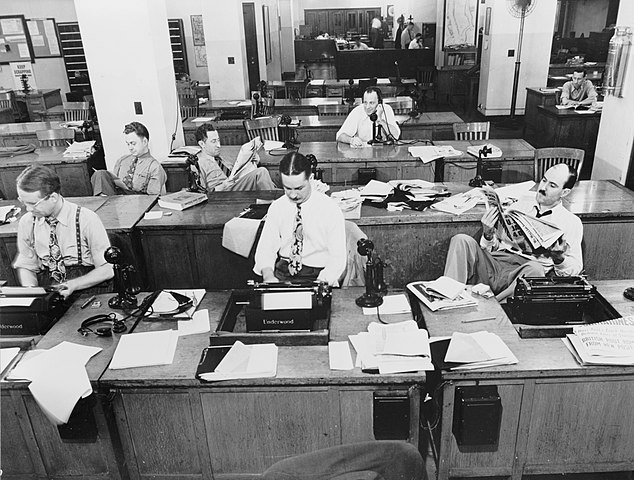 No, not that newsroom.

HBO’s mildly anticipated drama The Newsroom returns for a second season July 14, and every journalist, intern or blogger with internet access will be watching with a critical eye. Famed screenwriter Aaron Sorkin launched the new series last year, chronicling the many motley adventures of fictional Atlantis News Network anchor Will McAvoy and his ethnically diverse production team.

Although the characters are fictional, each episode’s plot revolves around the (heavily dramatized) reporting of real life events, from the 2011 British Petroleum oil spill to the assassination of Osama Bin Laden.

Sparks fly from the moral and romantic conflict between Will, a popular TV anchor appeasing the demands of network executives, and his news purist executive producer, MacKenzie McHale. (Oh yeah, single-syllabic first names for male characters and alliterative “Aren’t those both last names?” names for female protagonists is also a Sorkinism.)

Throughout the first season, MacKenzie’s incessant prodding forced Will out of what we in the business call “soft-reporting”—not being critical on issues, usually to win the favor of a specific demographic. Eventually, he embarked on a quixotic quest (Seriously, Don Quixote gets mentioned frequently) to “civilize the public,” rebelling against the wishes of his corporate overlords and even the desires of the American public.

By the end of season 1, Will insulted the Tea Party on national television, discovered phone-hacking espionage within his own company, reignited a flame with his former lover/current E.P. and found his job threatened by corrupt, money-hungry executives.

The show is impeccably acted, with a bristling lead performance from Jeff Daniels. Other notable players are Olivia Munn as socially awkward economist Sloan Sabbath, Allison Pill as skittish producer Maggie Hill and Sam Waterston as sozzled cable news president Charlie Skinner. (His character really isn’t essential to the plot, but he’s a cute old man and he makes you smile when he swears.)

And of course it’s HBO, so you can expect sleek set designs, costuming, music, editing, the works.

Much like the business of any real news organization, Sorkin aims to educate as well as entertain. The series tackles the distressingly real threats to the modern news industry, from tabloidization to censorship, commercialization to credibility. Each episode concludes with a tidy answer to whatever moral dilemma our stalwart heroes face that episode.

Whether or not you agree with his opinions on media is grist for a debate that Sorkin seems to encourage. Do you see a highly intelligent entertainment medium teaching valuable lessons to the public, or just an overly dramatized representation of a dying industry made up of reporters who probably make fart jokes more often than they listen to NPR?

This is where we come in.

Adam Khan, a bright-eyed intern, is hopeful about the show’s potential impact. With each episode, he sees the possibilities of a future newsroom-topia, where he will one day implement the lessons he learned from Will McAvoy. Sure, the show’s a little over the top at times, but aren’t we supposed to dream big? Then again, he’s been in the business for two years and still doesn’t have bills to pay.

Raheem Hosseini backpedaled into reporting in 2004, when he discovered that coming up with cool band names wasn’t a thing. (At least not a paying thing.) He’s less enamored with Sorkin’s polished but maddeningly ham-fisted drama. Which makes sense, since he’s quickly earned an office reputation as the curmudgeon who starts each sentence with, “I hate it when…” So look for that.

Dave Kempa is a vagabond poverty reporter who’s lived in more states than Jay-Z has nicknames. He doesn’t have cable—or a TV—but he likes how the show makes him feel and wants to be included in this roundtable dissection of our dramatized profession. He also has a pretty cool boy band haircut and a sweet, sweet ‘stache.

Shoka has never seen The Newsroom. Actually, she also doesn’t own a television set and can’t really watch shows online on her old, malfunctioning computer, either. She doesn’t know why she is involved in this.

Over the course of the next nine weeks (or however long it takes us to get sick of this experiment), this quartet will put forth dueling commentaries on each episode. Positions will be staked, names will be called and feelings will be hurt. Will it amount to everyone (except Shoka) measuring their journalistic junk over a mediocre cable show? Probably. But it should be a lot of fun. Look for new entries each Tuesday–probably.

To be so cliché: Stay tuned.