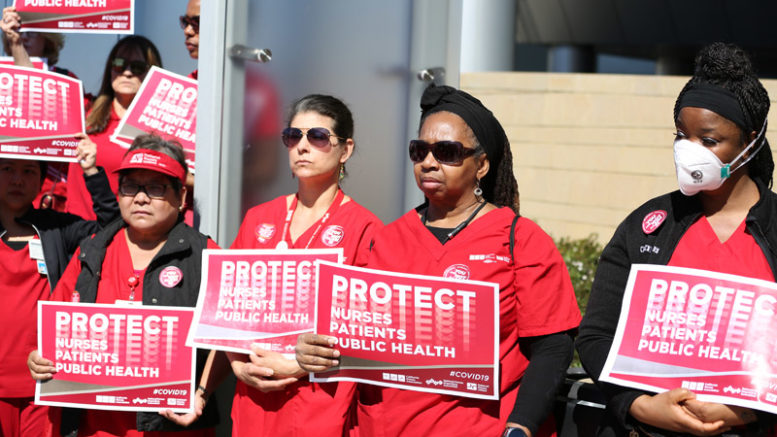 As California’s coronavirus strategy has moved from containment to mitigation, the health care workers on the first line of response to the epidemic are also finding themselves on the front line of potential infection. From internal conversations to calls for action from their unions, nurses, first responders and hospital staffers have sounded the alarm, raising questions about the safety protocols and spotlighting flaws and lags in response, in this state and nationally.

“Nurses are eager to take care of patients and make sure that our communities are safe, but we need the right staffing, equipment, supplies, communication and training to do this safely,” Deborah Burger, president of National Nurses United, which represents about 150,000 nurses around the country, said during a public health roundtable earlier this week.

“Put simply, if we are not protected, our patients are at risk,” Burger said.

The union has asked the state to notify nurses when patients sickened by the virus are sent to their health care facilities. They are also petitioning the state to release a full account of the protective gear in stock statewide, including respirators and information about where these respirators are stored, citing concerns over a shortage of respirators and other personal protective equipment.

The nurses union, which staged a day of protest throughout California on March 11, says that some of the workplace safety guidelines for states recommended by the Centers for Disease Control and Prevention are not rigorous enough to sufficiently protect health care workers and their patients.

Earlier this month, the union released a nationwide survey of 6,500 nurses in which only 29% said their hospitals had a plan in place to isolate potential coronavirus patients, and only 44% said they had gotten information from their employers about how to recognize and handle the virus.

As sick people turn up in emergency rooms, community clinics and school nurses’ offices, the workers who initially treat them run a high risk of infection. After a Vacaville hospital reported the first U.S. instance of community transmission and the patient was transferred to UC Davis Medical Center in Sacramento, for example, health-care workers’ unions reported 124 workers were placed under quarantine. (UC Davis Medical Center later said that number was inaccurate but did not provide an estimate.)

Concerns have also been raised about health care workers inadvertently spreading the virus. Sonia Angell, director of the California Department of Public Health, said her agency is collaborating with all groups involved in response and checking regularly with hospitals and health care facilities to learn where their needs are.

SEIU-United Healthcare Workers West, which represents nearly 150,000 workers across California, is also asking the state to help increase access to coronavirus testing for both workers and the general public. Spokesman Sean Wherley said the union also wants hospitals to make it easier to track workers sent home for possible exposure to the virus, and to provide clearer follow-up.

In California and nationally, testing has been an ongoing issue. Though thousands of Californians are self-monitoring and self-quarantining, only 1,075 people have been tested in the state, with a backlog of about 200 tests, Newsom said March 10. Commercial labs are supposed to help relieve some of that load.

Workforce shortage is also a concern. “If each positive patient results in five to 10 workers being sent home, how many times can that happen before you have a staffing crisis?” Wherley said.

The California Hospital Association said healthcare staffing hasn’t become an issue at this point, “but it is certainly something everybody has to be cognizant of,” said spokeswoman Jan Emerson-Shea.

Newsom’s emergency declaration earlier this month on coronavirus allows health care workers to come from out of state to fill any gaps should California experience a crisis in staffing. Still, state lawmakers—the majority of whom, like Newsom, were elected with the support of organized labor—have been sensitive to health care workplace concerns.

“Making sure we protect health care workers is extremely critical because we depend on these very same health care workers to take care of the patients who may end up in the hospital,” said Sen. Richard Pan of Sacramento, chairman of the Senate Health Committee.