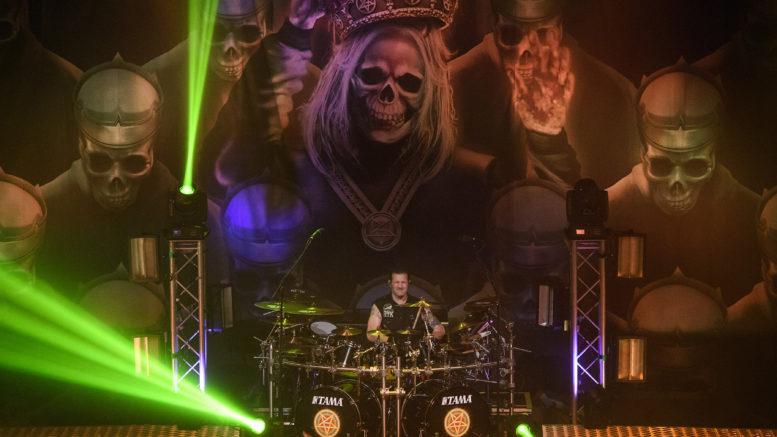 Slayer’s not doing interviews for their final tour, but SN&R caught up with Anthrax’s Charlie Benante (drums) and Lamb of God’s Mark Morton (lead guitar) to ask the heavy question: with Slayer and so many other rock and metal bands hanging it up, how’s it going?

Excitingly, actually. To be clear, both Benante and Morton said neither of their bands are calling it quits anytime soon. In fact, they’re hungrier than ever.

In April, Anthrax released Kings Among Scotland, a concert DVD from a sold-out February 2017 show at the Barrowland Ballroom in Glasgowe, and in the first hour of the set, they run through the entirety of their third album, 1987’s Among the Living. YouTube the performance of their pit-brawler anthem, “Caught in a Mosh,” and the band still thrashes joyously to the old material after some big lineup changes, including re-recruiting frontman Joey Belladonna, their on-again, off-again singer since 1984.

“We’ve absolutely found that love again of music and performing,” Benante said. “And just pushing it. Definitely pushing it harder than ever.”

2018 marks 20 years since Lamb of God released its self-titled record under their old name, Burn The Priest, which they changed in the late ‘90s, when the national radar started picking them up and the band wanted to be taken more seriously.

The best way to toast to the future? Resurrecting Burn The Priest and reaching into their roots through Legion XX, a which drops Friday, May 18.

It’s a cover album, but Garage Inc. this is not:  listen to their version The Accused song “Inherit the Earth,” heavier than anything on Metallica’s 20-year-old tribute suite. Ministry, Melvins and Bad Brains; the list of songs and artists, meticulously sourced by every band member, map Lamb of God’s history of punk and metal inspirations.

“Maybe we’ll be able to turn some of our fans onto the music that we were all about when we started this project,” Morton said.

Slayer made the final tour announcement in January, not alone in signalling the end of an era. Just this year, Elton John, Lynyrd Skynyrd, Ozzy Osbourne, Paul Simon and Joan Baez were just some of artists to announce farewell tours. Black Sabbath disbanded last year, and a long list of rock legends have passed in the last five, including most recently: David Bowie, Prince, Tom Petty, Chris Cornell, Scott Weiland, Chester Bennington and Lemmy Kilmister.

And now Slayer, whose rhythm guitarist, Jeff Hanneman, passed from liver failure in 2013.  Benante said this year’s announcement was bittersweet.

“Seeing any sort of hard rock or metal band coming to end is hard,” Benante said. “We need as many of them as we can get, especially the good ones.”

Slayer and Anthrax, two of thrash metal’s “Big Four” (counting Metallica and Megadeth), first crossed paths in 1984, for a show in New York City. Following that, the bands toured often together as fellow arena giants and pals. The ‘80s were a whirlwind and blur, Benante said.

“You’re doing your day-to-day backstage stuff,” Benante remembers, touring alongside the Big Four in those days. “’Hey man, what’s going on?’ ‘You know, I’m going to play some video games.’ ‘Yeah, I’ll be in your room in a minute.'”

The games followed them out of the green room. Benante remembers punking Slayer at a show during the Clash of the Titans tour, between 1990 and ‘91, where they performed in Europe and North America with Megadeth.

“We wanted to fuck with Slayer, because onstage, they don’t crack a smile,” Benante said. “So we got this huge fish from the fish market. And the [stage] riggers rigged it so that the fish, during [the song] ‘Angel of Death,’ would drop down right in front of Tom [Araya’s] face.”

Benante pointed out the stench on that fish was putrid.

“Sure enough, they start the song,” he said. “And that song’s pretty intense, and the fucking fish comes lowering down, and Tom couldn’t help but crack up. Trying to keep in control, but he just couldn’t. That was one of the funniest nights.”

Some vile stuff. But almost 30 years later, did Slayer ever return the fishy favor? Benante couldn’t be sure.

“I better not saying anything,” He said. “I don’t want anything to happen on this tour.”

As a high-schooler in the ‘80s, Morton’s first love was bay area thrash. Exodus, Testament and Slayer especially.

“They are the icon when you think of heavy metal that’s heavier than heavy metal,” he said. “Their work is unmatched.”

He cited Slayer’s fourth album, South of Heaven, as being particularly influential, when the band went downtempo and introduced some groove into their music.

“It’s a huge part of what Lamb of God does,” Morton said. “That album is one of a few that wrapped my head around … that kind of visceral, physical response from a riff when it’s slowed down.”

And in the early 2000s, Lamb of God toured under Slayer’s wing, debuting in the UK as a support. They’ve since toured together a lot over the years, but it’s still humbling to be asked to play with them again, and for the last time, Morton said.

“They could have had anyone they wanted to open up, and they asked us,” he said. “So it’s an honor.”

With so many rock bands retiring, conversations about music’s demise are inevitable among Benante and his friends. But what’s fleeting and dies hard at the same time?

Metalheads, who’ll sardine Papa Muprhy’s Park Sunday for a sold-out show with Slayer, Lamb of God, Anthrax, Behemoth and Testament performing. These are obviously different creatures, Benante assures us, than the music fans he eyes at festivals nowadays.

“This music doesn’t have a wishy-washy type of fan,” Benante said. “It’s not one week on,one off. If you loved any of these bands, you fucking loved them … Everybody in the crowd is wearing [your band’s] T-shirts.”