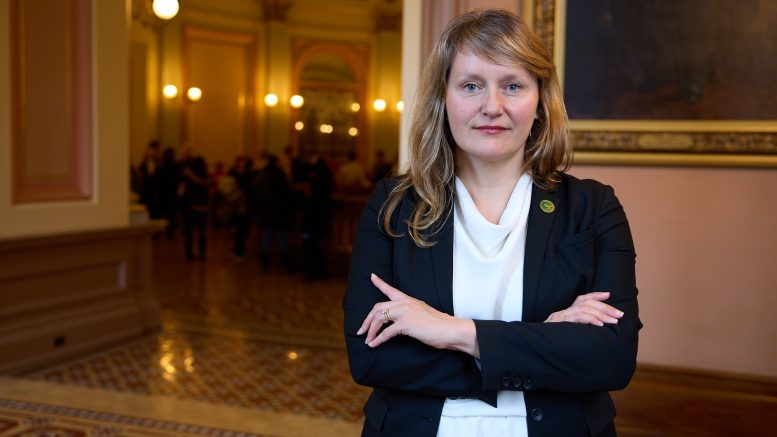 Buffy Wicks is the chair of the Assembly Housing Committee in the State Legislature. (Photo by Fred Greaves)

Assemblymember Buffy Wicks knows there is no such thing as a quick fix when it comes to California’s housing crisis. Solving a problem that goes back decades requires communication, coordination and big-time champions.

This year, Assemblymember Wicks (D-Oakland), chair of the Assembly Committee on Housing and Community Development, introduced AB 2011, which aims to make it easier to build affordable housing and grow a well-paid construction workforce.

We spoke with Assemblymember Hicks about the biggest hurdles to building houses and the potential strategies to overcome them.

Tell me about your work and how it relates to California’s housing crisis and the need for more affordable housing in the Sacramento region.

I’m the chair of the Assembly Housing Committee in the State Legislature. I’ve been the chair for about a year, so our committee deals with all housing policy that comes through state government, and I have the honor and privilege and challenge of being one of the state policy makers in the space.

California has a real deficit of affordable housing. We’re about 3.5 million homes shy of where we need to be to meet our goals to serve our communities in terms of the need. This puts real pressure on our rental housing market and our homeownership opportunities, and it’s really driving people out of our more expensive cities and, ultimately, driving people out of the state because they can’t afford to live here.

What do you see as the major factors driving the housing crisis in the Sacramento region?

The big issue statewide is there’s simply not enough housing in California and there’s not enough housing at all levels, both low-income affordable housing and also middle income at market rate. You have nurses and teachers who make too much to qualify for subsidized housing, but can’t afford the current market rate. And so they are really facing a lot of constraints in terms of their family budgets every month to meet their housing needs. We also don’t have enough residential construction workers to build the housing that we need to.

In the coastal zones, there’s really not enough land to build on. It’s a little different in Sacramento. We have more space and Sacramento also has done a good job of being more of a pro-housing city. It was the first city to get HCD’s [California Department of Housing and Community Development] prohousing designation because of their willingness to build. But over decades, we’ve made it difficult to build multifamily housing in California across the board, so that has put a huge strain on all of our regions.

One other issue that Sacramento contends with is the ongoing conflict and lack of coordination between the city and county. This is particularly problematic when it comes to addressing homelessness, where cities control the land, but the county controls the money for services. That’s not unique to Sacramento, but it’s certainly one of the issues Sacramento is contending with.

What do you see as the most promising solutions to lack of affordable housing?

Changes to the housing element process, so that cities have to plan for much more housing than before, and have to create a realistic path for how that housing gets built. We’ve added more teeth to this process from a state perspective by holding our cities accountable to creating the space and the pathway for more housing to get built.

We’ve also done a lot of legislation — state programs that override restraints like our ADU [Accessory Dwelling Unit] program. We’ve passed a lot of bills in the last five years that really looked to streamline the permitting process.

And I did a big bill this past year that got signed into law — AB 2011 — which allows development by right, meaning a quicker approval process. It bypasses CEQA [California Environmental Quality Act] and allows for ministerial approval, a much quicker approval process on retail strip malls and other commercial land while also providing a lot of affordable housing and great pay for the construction workers.

What can you tell us about these responses and why they offer the most potential to solve the problem of housing affordability?

For the ADU bills we’ve done, we’ve seen huge success statewide. In six years, we’ve gone from zero units to over 10,000 a year with continued annual growth. On AB 2011, there was a study by UrbanFootprint which showed that just that one bill alone could make 2 million units feasible to build. It’s unlocking the land to be able to build, it’s repurposing our commercial strip malls — many of which are dilapidated — and using that land for what it’s really for. And it’s also building up the workforce, which we know we need to do.

We’ve seen some progress and I think we will continue to see more progress as these bills get implemented fully. As someone who is the author of one of these bills, I’m going to be focused like a laser on making sure that the implementation of these laws really works.

What evidence exists to show the effectiveness of these strategies?

We look at other states and what they’re doing to increase the supply of housing. Oregon was first to implement something like SB 9, where they essentially got rid of single-family housing, as well as Minnesota. We also know that when certain cities do it, there’s more housing built. When you take away the red tape and streamline the process, it makes it a lot easier to build.

What limitations around these solutions exist?

Currently, in the California State Budget, we don’t have a line item for affordable housing — and yet, it’s the No. 1 issue everyone talks about. Every politician talks about it every election cycle. Community members hear about it. Voters vote on it. To me, it’s like, if we say we care about this, then let’s put out money where our mouth is and consistently care about this.

Now we’re headed into a recession, we think, and it’s going to be tougher. The state budget has been great to work with the last couple years, but I think we have to anticipate we’re not going to have those resources, so the fight’s going to get even harder. I think that remains, honestly, the biggest challenge we have.

The other thing that’s challenging is that there are factors out of our control like interest rates, material prices, supply chain issues. We, in the State Legislature, can’t dictate supply chain solutions or interest rate solutions. So we are trying to work with and change the things that we can control while still dealing and mitigating the stuff that’s beyond our control.

Looking at the last six or so years in the legislature, the state has done a lot to try to move the needle on this. It’s going to take time for it to get implemented. I know that’s a hard thing because voters want it fixed now and I get it. Every time I drive home, I get off the freeway off ramp, there’s a new encampment and it’s wrong for so many reasons. It’s morally not OK. From a public health perspective, it’s not OK. It’s just not how we should be living. And so voters want change now, which I totally agree with. It just takes time to get these bills implemented and turned into law. But I do think hopefully we’ll be on the precipice of change, especially if we can figure out the funding piece.