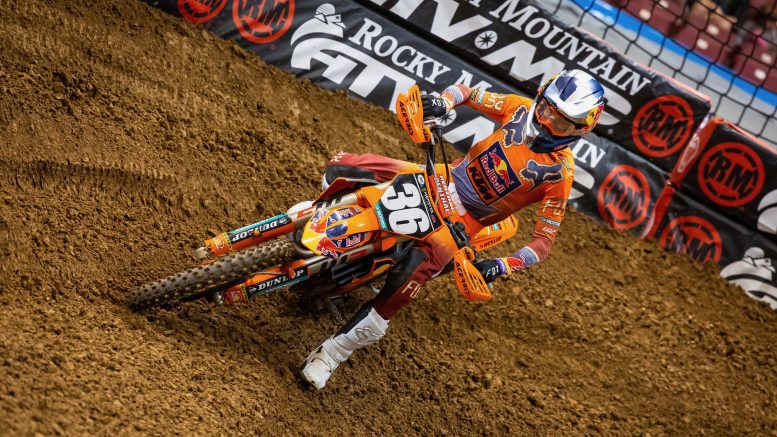 Although Sacramento has proven it can bring out record numbers for outdoor motocross at Prairie City’s annual Hangtown event, few riders generally stand a chance of making their name on the pro Supercross circuit, whether they’re from the Capital Region or not.

While many motocross fans have their eyes on plenty of upper-eschelon names – Cooper Webb, Malcolm Stewart, Christian Craig, Adam Cianciarulo and Jason Anderson to name a few – many Sacramentans are especially rooting for 19-year-old native son Maximus Vohland on his Red Bull KTM.

A fourth generation motocrosser, Maximus is the son of pro rider Tallon Vohland and counts well-known bike-master Tyson Vohland as his uncle. And while Maximus had a disappointing showing in the last Eastern Regional 250 Super cross season (42nd overall), he did end up finishing an impressive 6th overall in the outdoor motocross series.

On Jan. 14, Maximus will be racing with the #34 plate at the 2nd round of the 250 Western Regional, an Oakland event happening not far from where he lives in Sacramento. This is a make-or-break year for the young Vohland as his factory KTM ride is set to expire unless his Supercross results turn around.

Maximus only turned pro back in 2021, but his name has been buzzing around Supercross circles ever since. If his lineage is any indication, the Bay’s upcoming Supercross event will be the race to watch. Doors are at 10 a.m. with the opening ceremonies kicking off at 4:30 p.m. Tickets can be purchased here, with cheaper seats starting at $22 and the more expensive tier topping out at $95. RingCentral Coliseum is located at 7000 Joe Morgan Way in Oakland.

Be the first to comment on "A Sacramento hometown hero will be on deck for the Monster Energy AMA Supercross on Jan. 14"