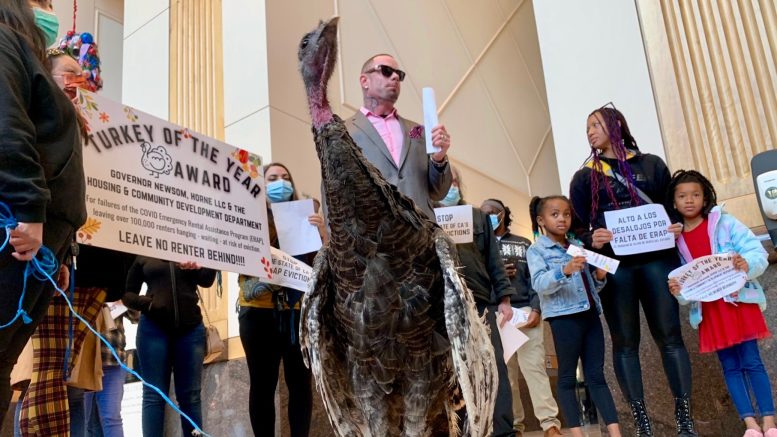 Two days before Thanksgiving, a turkey walks through the office of Horne LLC in Sacramento. Photograph by Scott Thomas Anderson

In the first chaotic months of the pandemic, as the Newsom administration shut down most of the state’s economy, leaders assured working people that if they did their part to contain the virus by staying home, then the income they lost wouldn’t lead to getting evicted or becoming homeless. Now, nearly three years later, tens of thousands of tenants from Sacramento to San Diego are heading into Thanksgiving with a complete sense of betrayal on that front.

On Tuesday, housing advocates brought signs and a live turkey to the Downtown office of the entity they say is most to blame for this apparent debacle, Horne LLC.

Horne is a corporation that is contracted by governments across the country to run their emergency programs and disaster relief efforts. In 2020, the Newsom administration turned to Horne to deploy California’s Emergency Rental Assistance Program, or ERAP, which was aimed at preventing widescale displacement during the pandemic. In theory, that program ended five months ago. There’s just one problem: According to the state’s own records, there are still 104,000 applications for rent relief that Horne hasn’t even made a decision on. There are also thousands of renters trying to appeal their decisions on the grounds that they were wrongfully denied payments. People in both groups currently have no clue when or if they’ll get help with the financial hardships or impending evictions they’re facing.

This isn’t the first time that Horne has been at the center of a controversy. According to a 2018 story by Metro News, the state of West Virginia halted a contract with Horne for long-term flood relief – and stopped it midway through the contract – because of complaints about how Horne was providing services. Nevertheless, Horne raked in millions by the time that contact was cancelled, prompting a full review by the West Virginia State Auditor’s Office.

In June of this year, the Alliance of Californians for Community Empowerment, or ACCE, along with PolicyLink, Western Center on Law and Poverty and several other nonprofits, filed a joint lawsuit against the state of California over how Horne is administering the public’s ERAP program. Representatives for ACCE said this week that, through the course of that litigation, their attorneys learned that Horne is now demanding California taxpayers shell out even more money for Horn’s own contract in order to finish what it started.

Horne LLC’s media spokesperson has so far not responded to an interview request for this story.

The demonstrators who descended on Horn’s plush Downtown office along Sacramento’s Capital Mall Tuesday wanted California officials to reign in the corporation’s performance – and do it in real-time rather than have audits down the road like West Virginia.

“They’re collecting $25 million, 5% of the money that was awarded, and they’ve not even given out 25% of the money they’ve received,” said James Daniels, an Antioch renter who got evicted after his ERAP case was mysteriously delayed. “Where is it all going? That’s what we have to find out.”

Jovana Fajardo, Sacramento director for ACCE, brought a living turkey into Horne’s office to symbolize the company earning her organization’s award for ‘Turkey of the Year.’ Fajardo held a microphone and spoke directly to Daniels about a letter that he’d just attempted to deliver to Horne.

“The door was locked and it was blacked-out,” Daniels replied, “so I’m pretty sure they got word that we were coming, which if fine, but they should have had documents ready for us instead of hiding … They don’t want to answer the questions that should be public record.”

ACCE eventually read the letter aloud to those assembled under a towering Christmas tree with its ornaments along Capital Mall. The letter called on Gov. Gavin Newsom and the California Housing and Community Development Agency to force Horne to review and resolve all outstanding income-eligible ERAP cases within the next two weeks, as well as review all cases “previously denied for inconsistencies and unresponsiveness with a third-party advocate within the next 30 days, unless the applicant is unreachable, or fraud is confirmed.”

The demonstrators were ultimately asked to leave by the building’s security.

ACCE Director of Communications, Anya Svanoe, told SN&R that in addition to quickly getting rent relief to those are who entitled to it, there is another important outcome her organization wants.

“We want the state to hold Horne accountable,” Svanoe said. “Ultimately, they’re outsourcing and privatizing essential services while families’ lives are on the line. They’ve failed every single deadline that they’ve been tasked with … They’ve made millions of dollars while people are at-risk. Their incentive, their bottom-line, is money, not keeping people housed. While the governor is scrambling to address the homelessness crisis, which is particularly bad in Sacramento, the least he can do is fulfill the promise he gave to Californians.”

1 Comment on "Holiday abandonment: More than 100,000 COVID-impacted renters tell state ‘Thanks for nothing’"