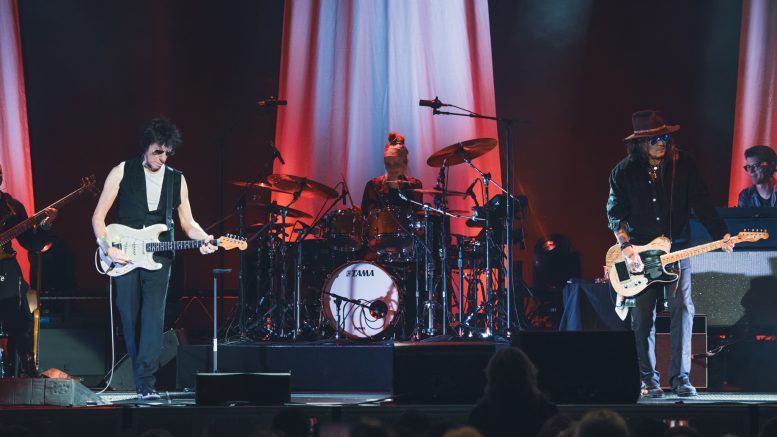 Photographs and review by Sugarwolf

Johnny Depp joined guitar legend Jeff Beck on stage at Hard Rock’s Fire Mountain venue in Wheatland on Thursday. The pair have been on tour supporting their recent collaboration 18, which features original compositions alongside covers of some of their favorite songs. Beck described the manner in which they chose the album’s title by saying, “When Johnny and I started playing together, it really ignited our youthful spirit and creativity. We would joke about how we felt 18 again, so that just became the album title too.”

That youthful spirit and creativity were both on display during the duo’s set Thursday. At times during the performance, the actor could hardly contain his smile. Depp appeared to be more thrilled on stage playing his guitar than when he was captain of the Black Pearl. Similarly, Beck, who famously succeeded Eric Clapton in the Yardbirds – and who had a profound influence on guitar contemporaries like Slash as he became undisputed architect of classic rock – seemed to thoroughly enjoy sharing the stage with his friend.

This chemistry has been part of the draw for concert-goers as the tour progresses. So has the opportunity to see Johnny Depp sing. And while it should come as no surprise to Depp’s fans to see him on stage with a guitar, many are still waking up to the fact that he’s got the musical chops to share the stage with the legendary Beck – and they’re filling up venues across the nation to hear that combustable combination.