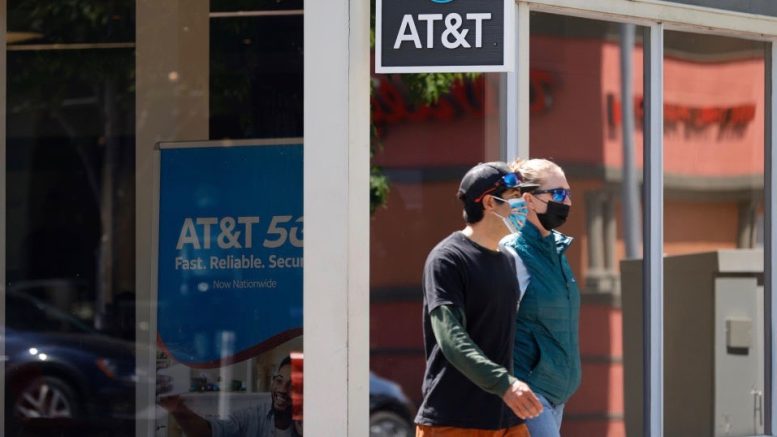 On the heels of President Joe Biden’s speech warning of an existential threat to American democracy, voting rights advocacy organization Accountable.US today unveiled a scorecard that grades the nation’s top 100 corporations on their support for democracy. The “American Democracy Scorecard” did not grade on a curve: Two-thirds of the companies received failing marks.

The lowest scorer, according to the group’s criteria, was AT&T, followed by Verizon. Charter Communications and Comcast were also among the 10 lowest scorers. All four belong to the telecommunications industry, which received the scorecard’s lowest ranking among all industries.

AT&T CEO John Stankey weighed in on the issue of voting rights last spring after the passage of the Georgia law that makes it a misdemeanor to give people water while they wait in line to cast their ballots. “We believe the right to vote is sacred and we support voting laws that make it easier for more Americans to vote in free, fair and secure elections,” Stankey said in the statement.

Nevertheless, AT&T’s Texas PAC gave $100,000 in contributions to Gov. Greg Abbott on the very day that he called for a special legislative session to pass sweeping voting limits in Texas.

Lindsey Melki, director, corporate values and democracy, at Accountable.US, stresses that the scorecard is a living tool and corporations will have a chance to raise their scores. “We will be updating this regularly. So we hope that corporations take advantage of that, and are able to make changes on their end and align their actions with their spending and stand up for democracy,” she said. None of the telecommunications companies responded to a Capital & Main request for comment before publication of this story.

Fortune 500 companies came forward after the Jan. 6, 2021, insurrection and made statements condemning the attack or paused donations to congress members who objected to certifying the election for Joe Biden. But 33 of the 50 companies that stopped their political giving to election objectors eventually resumed, according to Accountable.US.

These companies have come under increasing pressure from activist shareholders who demand they explain how their donations to lawmakers supporting voting restrictions align with their corporate values. Now Accountable.US has launched a letter-writing campaign in the wake of the release of its scorecard.

“While your company is currently failing to stand up for democracy, it is not too late to get your priorities straight and begin aligning your values with the values shared by most Americans,” Accountable.US President Kyle Herrig wrote in a letter to Stankey.

Accountable.US also plans a six-figure digital media effort targeting elected officials, executives and business school students in cities around the country that are home to the Fortune 100 companies.

Accountable.US rated companies according to a series of 14 criteria that includes their pro-democracy statements, the transparency of their political spending disclosures, and whether they have participated in pro-democracy business groups. The organization also looked at whether their political action committees donated to federal lawmakers who opposed voting rights legislation, supported objections to certifying the 2020 presidential election or opposed the formation of a congressional committee to investigate the Jan. 6 attack on the Capitol. Their contributions to state officials who voted for “anti-voter” legislation or who supported 2020 election audits were also considered.

Ultimately, the scorecard draws on campaign finance data that targets lawmakers as well as corporations. It factors in contributions to all 212 Republican congress members who voted against the John L. Lewis Voting Rights Act. Some Democratic lawmakers supported some of the state legislation restricting access to the vote, although most backers were Republicans.

“We didn’t discriminate,” said Melki. “We just wanted to keep an eye on the corporations, and call out the corporations who are making these donations, because they need to step up and do more to protect our democracy.”

The companies with the 10 worst scores are AT&T; Verizon; Energy Transfer, a natural gas pipeline company; Charter Communications; Comcast; Boeing; ExxonMobil; Lockheed Martin; UnitedHealth Group; and Pfizer. Home Depot emerged as the top donor to federal lawmakers who voted to overturn the 2020 election, contributing over $350,000 to that group.

Over the past two decades, lawmakers have erected barriers to voting that include stricter voter ID laws, reduced voting times and the purging of voter rolls. These efforts increased after the Supreme Court weakened the Voting Rights Act in 2013. Since 2021, 18 states have adopted 34 voter suppression laws.

During that time, Fortune 100 companies have donated $6.2 million to state legislators who have supported such restrictive voting laws, according to the scorecard. They donated an additional $988,059 to state lawmakers who supported election audits in the wake of the 2020 election of Joe Biden despite the lack of evidence of fraud.

Since January 2021, their contributions to federal lawmakers considered to have thwarted democracy are even greater. Fortune 100 companies gave $19.2 million to federal lawmakers who opposed the formation of the Jan. 6 commission and $5.7 million to congress members who voted to overturn the federal election, according to the scorecard.

Last month, an NBC poll found that democracy was a top concern among voters, exceeding inflation, with one in five voters saying it was the most important issue facing the country.

That’s “no surprise,” according to Jeremy Funk, communications director at Accountable.US. “People are hearing every day about new efforts at the state level to restrict voter access and all the news around the insurrection. They are rightly concerned about this threat,” Funk said.