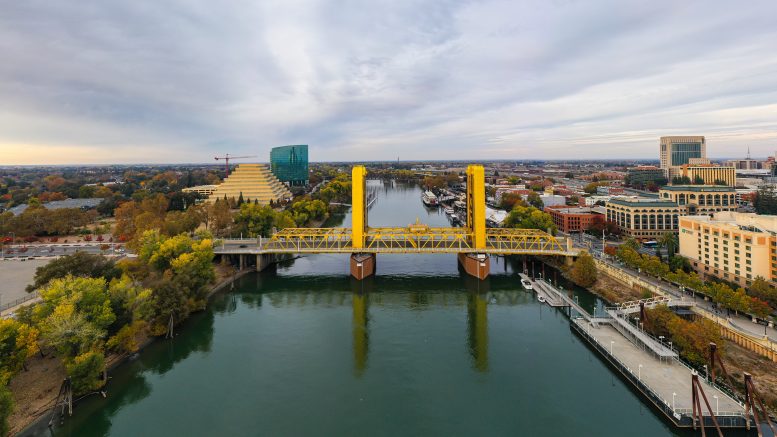 With Gov. Gavin Newsom set to sign a slate of bills boosting California’s fight against climate change, regulators are also finalizing a far-reaching plan to cut the state’s emissions. But the oil and gas industry is exerting pressure on regulators to shape the plan in ways that could delay the state’s progress, say critics.

A draft of the plan by the California Air Resources Board (CARB), released in May, reflects the interests of oil and gas refiners and agrochemical companies involved in the production of biofuels, while relying on ineffective methods for cutting emissions, say climate policy experts and environmental justice groups. The plan is supposed to be a roadmap for achieving “carbon neutrality,” where the state effectively emits no greenhouse gases by 2045, while making deep cuts by 2030.

Industry goals such as a build-out of engineered carbon capture technology (in which CO2 is captured and stored rather than released into the atmosphere), and an expanded role for liquid biofuels to displace fossil fuels in planes and trucks, have resulted in a model that enables more refineries to remain in operation, perpetuating risks for people living near them. Additionally, the plan sidesteps concerns about California’s cap and trade program while anticipating it will result in millions of tons of reductions — which critics worry won’t actually happen except on paper — over the next seven years.

Among the industry’s lobbyists pushing these measures are at least three former California Air Resources Board regulators, who reached out to their former colleagues at the agency on behalf of fossil fuel, business groups and agrochemical clients, according to interviews and emails obtained by Capital & Main.

Revolving door practices — in which government officials give up public service for lobbying in the private sector — have a long history in California, says Liza Tucker, a researcher at Consumer Watchdog who has investigated revolving door influence in other environmental agencies.

“It’s a real problem, and it is entrenched,” Tucker said. For example, she added, the plan focuses on reducing demand for oil and gas in the state but says comparatively little about reducing supply for export — even though climate damage in California is caused by emissions from anywhere, as greenhouse gases in the atmosphere trap heat and influence extreme weather events like droughts, heatwaves and floods.

A spokesperson for CARB did not acknowledge questions about influence from lobbyists but said regulators “heard from stakeholders in public workshops and webinars, at formal board meetings, and when requested, in meetings with staff or board members” while putting the plan together. The plan aims to drastically reduce emissions from the industrial, energy and transportation sectors. A final version will be released in the coming months, as CARB refines it based on ongoing feedback.

California’s plan to cut emissions will be implemented in part through the Low Carbon Fuel Standard (LCFS) program, which CARB says has helped the state reduce oil consumption by 2.7 billion gallons since 2011.

It’s done that by propping up biofuels made from vegetable oils and animal fats, and by encouraging companies to lower the “carbon intensity” of their fossil fuels by means such as adding ethanol to their gasoline products and using renewable power to pump oil from the ground. Companies earn credits and can trade or use them to offset their pollution.

Jon Costantino was part of the first generation of air regulators to design the LCFS back in the late aughts. He later took a job helping businesses navigate the regulations he put together, and now runs his own firm representing oil and gas clients and a supplier of clean car infrastructure.

CARB says the program has been a success, pointing to declining emissions from transportation fuel. Email records indicate that Costantino has regularly been in contact with top regulators about the LCFS. In a public hearing, he urged regulators not to make big changes to the program because companies were complying with obligations.

“This thing is working. Keep up the policy signal and you’ll keep getting the investment,” Costantino explained to Capital & Main. One of his clients, Phillips 66, recently announced that it was transitioning its petroleum refinery in the Bay Area to processing biofuels exclusively. Costantino’s firm has taken $295,200 from Phillips 66 since 2017, almost half of it this year alone.

CARB’s plan forecasts an expanded use of biofuels through 2045. Industry watchers have raised concerns about the environmental impacts of fuels such as ethanol, biodiesel and sustainable aviation fuels, which have historically been produced from crops that induce changes to farmland in ways that increase emissions. Fuel producers counter that they will start using “sustainable waste,” such as agricultural residue, as feedstocks to reduce emissions.

The LCFS is funded by a tax on gasoline, reflecting outdated ideas for addressing climate change, says Michael Wara, director of the climate and energy policy program at Stanford University’s Woods Institute for the Environment. In the current form, the program rewards companies for actions that won’t help the state decarbonize fast enough.

“Does it make sense to use costs collected from people at the gas pump to subsidize low carbon liquid fuels?” he said. “Every year that goes by the argument gets less convincing.”

CARB’s plan also assumes that lowering oil and gas production and demand in California, plus more refining of biofuels, will lead to less petroleum refining in the state. But years of data shows oil exports from California have increased despite Californians’ declining oil consumption, according to a technical report submitted by the California Environmental Justice Alliance.

“There’s literally no limit to how much oil California refineries are allowed to import in order to export refined fuels,” said Greg Karras, an environmental justice consultant who wrote the report.

In a meeting on Sept. 1, CARB committed to forming a task force to study oil exports, said sources who were present.

In another example of a prominent former regulator now advocating for high-powered clients, records show a lobbyist named Virgil Welch emailed Jamie Callahan, the agency’s chief of staff and policy adviser, with a letter from agrochemical companies involved in the production of corn, a primary ingredient in U.S. ethanol.

“Wondering if you and the boss lady might do a sit down with this group [of agrochemical companies] to talk about ag/climate,” Welch wrote to Callahan. “I can fill you in more for context at your convenience if helpful, now that I am free from the shackles the kept from away [sic] from CARB!”

Welch is now a partner at Caliber Strategies but previously worked as chief adviser and special counsel to former CARB chairperson Mary Nichols, developing clean air rules for medium- and heavy-duty trucks, cap and trade and the LCFS, according to his LinkedIn page. Officials who leave for the private sector must wait a year to lobby their former employer.

The companies Welch represents, such as BASF, CF Industries and Novozymes, manufacture pesticides and fertilizers, including some they say are less carbon intensive than synthetic versions.

Ethanol is blended with gasoline in California, but the draft plan barely mentions it. Historically it is the largest biofuel incentivized by the LCFS by volume. Growing evidence indicates ethanol’s carbon emissions are on par with or worse than those of gasoline.

The plan says little about the cap and trade program, which CARB anticipates will shave 44 million metric tons of emissions by 2030 — the equivalent of 9,480,646 cars driven for one year.

Experts worry the plan will allow polluters to use credits for complying with emissions law rather than cutting pollution, and point to examples of groups that sell stakes in forests for carbon offset credits, gaming the program.

In an email last year, Costantino reached out to Chanell Fletcher, CARB’s deputy executive officer of environmental justice, to promote offset credits. Costantino is a lobbyist for the Verified Emission Reduction Association, which certifies the credits.

“Offsets haven’t been very popular with Environmental Justice stakeholders, but VERA believes there can be some common ground,” Costantino wrote to Fletcher. “I am requesting a meeting to introduce you to the group and answer any questions you may have about offsets prior to the next Scoping Plan process.”

The meeting was “more a meet-and-greet introduction,” Costantino told Capital & Main. He defends cap and trade for having generated billions for other climate investments through a fee on emissions. Fletcher did not return a request for comment.

Catherine Garoupa White, a member of CARB’s Environmental Justice Advisory Committee who opposes offsets, said regulators should have invited a committee member to the discussion with Costantino. When she brought up concerns about cap and trade, she said, regulators refused to discuss it because they feared it would disrupt the market for credits.

“It’s incredibly obvious that carbon capture and cap and trade, those are really two things [CARB] is relying on to make up the [emissions] shortfall.”

A group of state legislators submitted a letter to CARB with similar concerns, writing that the current plan calls for only 63% of reductions coming from direct cuts to pollution — lower than the states of New York and Washington.

Both Welch and Costantino are lobbying for greater deployment of point source capture, in which CO2 is captured at the source rather than released into the atmosphere.

The industry and trade unions have lobbied for point source capture for the last two years, and in August the Legislature sent a bill to Gov. Newsom that directs CARB to establish a carbon capture, removal, utilization and storage program. It was one of the governor’s climate priorities.

Point source capture may come in handy for industries where it’s hard to limit emissions, such as cement, clay and glass production. But it has an underwhelming track record, raising serious concerns about plans that rely on the technology to address climate change, according to researchers at the Institute for Energy Economics and Financial Analysis.

In the U.S.,12 operating facilities capture a total of 20 metric tons of emissions a year. California wants to capture 4 million metric tons annually by 2045 and install capturing technology on refineries by 2030, according to CARB’s draft plan.

The plan also cites a study by Lawrence Livermore National Laboratory on point source capture that was promoted — through layers of front groups — by Michigan utility company DTE Energy, which has biomass power plants in California. The promotion campaign included an educational toolkit on carbon capture for teachers and students in the San Joaquin Valley.