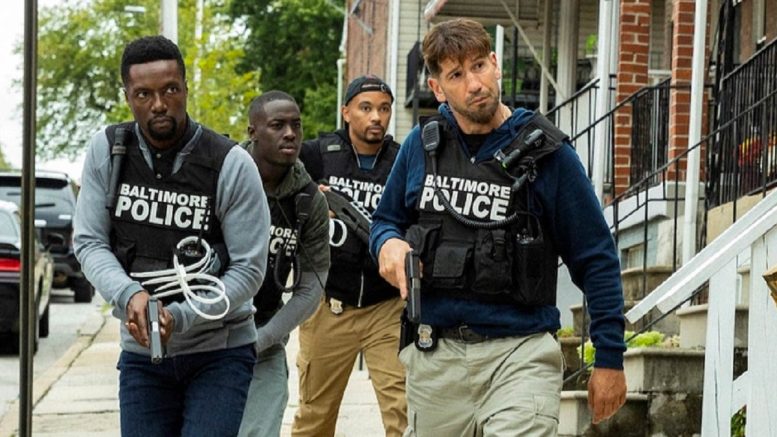 HBO's miniseries 'We Own This City' premiered at the start of summer.

A real story of deep-rooted corruption, questionable incentives and the work of oversight investigators details how problems grow and are confronted in troubled departments

“I’m not here to talk to you about the fights you have to have, you see, I’m here to talk to you about the ones you want to have – the ones you think you’re entitled to because you’re wearing a badge,” an animated police sergeant tells a gathering of wide-eyed cadets. “That’s the real brutality. The thing is you don’t need that kind of brutality … First off, no one’s gonna talk to you if you’re beaten’ on em. No one’s going to tell you what you need to know; and here’s the thing, if you really want to kick ass out on the streets, it’s information: Find out who’s who; who does what dirt – where do they do it? Who is it that they do that dirt with? Information, that’s what will get you cases.”

The man delivering the words is the actor Jon Bernthal, a chiseled-jawed former brawler known for dramatic action roles in The Punisher and The Walking Dead. But the persona that Bernthal is inhabiting in this opening scene of HBO’s We Own This City isn’t based on a fictional hero at all – but rather a very real figure whose steep fall from grace left a police department questioning the stories it tells itself.

In the miniseries, which was released at the start of summer, Bernthal portrays former Baltimore Police Sgt. Wayne Jenkins, once seen as a rising star in the ranks of Maryland law enforcement. Jenkins led the Baltimore Police Gun Trace Taskforce. Based on numerous convictions between 2018 and 2019, that investigative team operated as little more than a state-enabled robbery crew – another one of Baltimore’s many criminal organizations. The members of this crew just happened to wear badges. The show’s opening credits climax with actual footage of the city’s then-police commissioner, Kevin Davis, saying of Jenkins and his fellow detectives: “These officers, they’re 1930s-style gangsters.”

For police reform advocates, the new series may seem like a huge gift for confirming priors. It certainly details a worst-case scenario in a major American law enforcement agency. But for viewers who are more concerned about the spiking crime rates across the nation – a larger group, according to polling – the docu-drama shouldn’t be blown off as two-dimensional propaganda around defunding public safety. There are lessons from this real-life story that speak directly to improving public safety. It’s pretty clear that a tremendous amount of work went in to clawing at the essential truth of what happened with this now-infamous task force; and, not surprisingly, the closer the show’s writers got to the weak human instincts behind these crimes, the more nuanced their theme became about the reality of modern policing.

We Own this City was produced by David Simon, the former Baltimore Sun police reporter who arguably changed television forever when he created The Wire. Prior to that, Simon had spent the year of 1988 essentially embedded with the Baltimore police homicide unit. That experience seems to have helped him portray the police characters in The Wire with as much flesh-and-blood flaws, and deep inner-conflict, as the genuinely relatable gang leaders and drug-slingers in its story – all of these personalities stumbling through the fast-dimming colors of what’s been called “a moral twilight.”

“No one gets cops more than David Simon,” a detective recently told me after watching We Own this City. That’s an opinion he and several other officers I know have had since first experiencing The Wire two decades ago.

We Own This City was co-created by novelist George Pelecanos, who wrote for Simon’s magnificent series on New Orleans’ culture Tremé and helped develop his 1970s Time Square porn saga The Deuce. We Own This City is based on a book by veteran Baltimore Sun reporter Justin Fenton, who also covered the riots that happened in the aftermath of Freddie Gray’s death in police custody. Ed Burns, the former Baltimore police detective-turned-school teacher who co-created The Wire with Simon also worked on script duties for the new show. Its writing talent is rounded-out by best-selling cultural critic and memoirists D. Watkins, an East Baltimore native who was actually assaulted by one of indicted cops portrayed in the story, Daniel Hersl.

With those wordsmiths at work, it’s not surprising We Own This City achieves powerful, sometimes haunting, moments of drama. What is unexpected is that Simon himself steered this team of writers to a story about the streets of Baltimore and its broken police department. For years the public and the media have all but begged him to bring back The Wire in some form. In a recent video interview with Washington Post reporter Geoff Edgers, Simon explained why he was so reluctant to do a project like that.

“Well, I thought I was done with Baltimore and crime,” he admitted. “I live here, and my city certainly took a bite of that apple, and I didn’t want to make it take another on my account.”

Simon went on to explain that what happened with Wayne Jenkins’ team in Baltimore caught his attention after years of publicly arguing that the main job of police is to prevent violent crime and that the Drug War is crippling their ability to excel in that mission. Simon came to view revelations about the Gun Trace Task Force as a logical evolution, if terrible “coda,” of the trends his writing has explored since the 90s.

Referencing a noted history of some cops skimming cash that’s found at drug busts, Simon pointed out that Jenkins’ task force detectives were convicted of taking that capitalist impulse to a new, startling level.

“There’s an ethos to this, the drugs went to evidence control: Not in Baltimore – not in 2015,” Simon reflected. “We’d finally reached the terminus of a drug war that has utterly devoured our law enforcement deterrent. Meanwhile, you can’t find cops in Baltimore anymore – you can’t find enough of them – who know how to write a search warrant that will hold up in court; who know how to use and not be used by an informant; who know how to testify on the stand without perjuring themselves; who know how to work a crime scene properly; who understand the police computer database. These are all skillsets – and they’re complicated skillsets – that you need to solve a major crime. But why do you need to learn all that when you can get paid to for making 30, 40, 50 arrests a-month, and handing this ground stash to this guy, and two vials to this guy, and then showing up in court to work all your overtime pay?”

In addition to its theme that elected leadership – and society writ large – must re-incentivize good, meaningful police work, We Own This City also documents how honest detectives and oversite investigators eventually brought the rogue task force to justice. Simon’s meticulous approach to how complicated probes unfold pays off here, laying out how Harford County narcotics detectives stumbled onto the first signs that their counterparts in the city were corrupt, which in turn got the attention of Baltimore Police Internal Affairs and then agents from the FBI. The role that the Civil Rights Division of the Department of Justice played in trying to reform Baltimore’s overall department gets its own spotlight.

I asked Raheem Hosseini, the Sacramento News & Review journalist most-associated with covering police reform, what his final verdict was on We Own This City. Hosseini considered it “a swaggering look at jaw-dropping corruption and a city government practically in free fall,” adding that it was a confident return to form for David Simon and Ed Burns, particularly, in light the ground they had previously broke with The Wire.

There’s nothing but agreement on those points from me, though I see it as a profoundly gripping story, too, mostly through its look at the career of a BPD detective named Sean Suiter. Portrayed in a devastatingly believable way by actor Jamie Hector, this homicide investigator caught between the mistakes of his past and a determination about his future ultimately died in a way that sparked a rash of conspiracy theories. The manner in which Simon’s team handled the dilemma around Suiter’s death – and the struggle he was caught in – adds another dimension of poignancy to the show.

The final scene of We Own This City, written by Simon, breaks the fourth wall in an intentionally disturbing way, dishing out plenty to contemplate when it comes to how personal corruption, and systemic complacency, gets self-rationalized through the right narratives. I asked that detective who loved the show what he thought about this final scene.

“It was a perfect representation of all that is wonderful and wrong about police work,” he responded. “We love mythology.”

Be the first to comment on "Analysis: ‘We Own This City’ is the series that both sides of the police reform debate should be talking about"