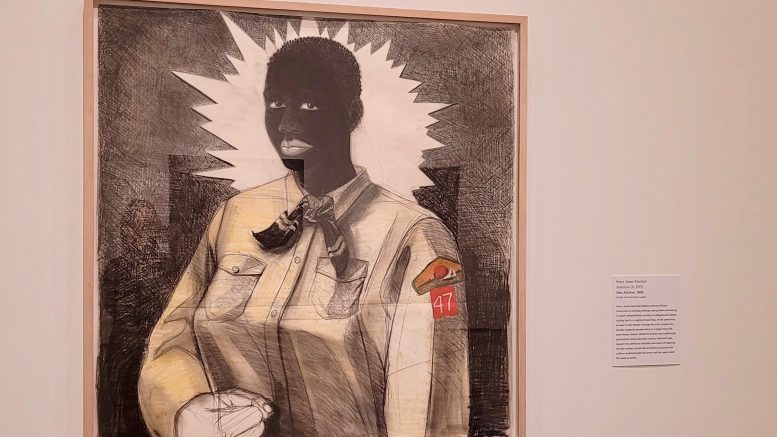 Kerry James Marshall's charcoal and acrylic painting, "Den Mother," is one of over 50 pieces currently on display at the Young Gifted and Black exhibit at U.C. Davis. Photograph by Keli Rafter

Passing through the Jan Shrem and Maria Manetti Shrem Museum of Art, there is a seemingly empty moving box sitting on a four-wheeled dolly. Surrounding it are paintings and sculptures placed against broad, white walls. The box is taped open and, inside, awaits a pink sheet taped to its lid that warns teasingly, “caution, art below.”

Lonnie Holley’s metal-wire sculpture “Still a Family in Business” lays tenderly at the bottom of the container. The piece shows a collage of faces floating in all directions, bent and twisted. As the viewer glances closer toward the center, the wires are knit more closely together – and the faces become more difficult to discern.

Holley’s wire-collage is one of 51 pieces at the U.C. Davis-based Mannetti-Shrem Museum through Dec. 19 that make up its new Young Gifted and Black exhibit.  According to Laura Compton, the museum’s communication specialist, the showing is modeled after four themes: dramatic use of color, reclaiming the color black, the use of non-traditional materials in the artwork; and an expanded idea of portraiture.

Only days before the exhibit opened, the museum’s associate curator Susie Kantor gave Sac News & Review an early look at the space. With some pieces still awaiting placement, the four aspects of the exhibit were organized into four phases. An additional reading room gives viewers a space to be seated and check out books related to the subjects explored in the exhibit. There’s also the encyclopedic table book of the complete Young Gifted and Black collection. According to Kantor, the works on display are a part of a collection of nearly 500 pieces from the Lumpkin Boccuzzi Family Collection of Contemporary Art.

Kantor said that this exhibit was originally scheduled to open before the COVID-19 pandemic. When it became evident they’d have to delay the weeks-long event for safety, Kantor remembered calls with co-collector Bernard Lumpkin seeming hopeful that all the museum needed to do is wait 14 days or so for the virus to blow over. Now that the exhibit is finally ready, she looks back on her time with the work – and with her connection to the artists involved – since the show’s inception.

“I’ve been able to sort of think about the works, and think about the artists, and sort of track them and really see how, since I first started working the exhibition, so many of the more emerging artists have really skyrocketed,” Kantor said. “That is sort of what Bernard is trying to do as a collector, and as a patron, is really support these artists at this really pivotal moment in their career and provide that sort of support — not just financially — to get them into museums and in advocating for them.”

One of the artists represented by the collection is Kenyatta A.C. Hinkle, who hails originally from Berkeley. Hinkle’s piece, “A Strong Wind,” was purchased for the collection by the Lumpkin-Boccuzzi family in 2014 and uses what Hinkle calls “colonial postcard images” of West African femmes. That year, Hinkle’s “The Uninvited” series included similar images altered to interrupt narratives depicted by outlanders around what they deemed exotic foreign cultures.

“Many of these images were trafficked all throughout Europe and America,” Hinkle noted. “And they created these conceptions about what it meant to encounter black skinned bodies. [I explore] how that mutates the fabric of the society and moving forward.”

Hinkle went on humbly about being included in the exhibit, acknowledging that she felt lucky to be presented among some of her favorite artists. She stressed that the exhibit maintains importance because of a thirst in the art community to hold conversations about Black excellence.

“Especially during these times that we’re in — these political times that we’re in,” Hinkle added. “It’s like this entire kaleidoscope of black genius, black imaginings, so many people that are working with things that are specific to blackness. And blackness not as a monolith; this whole spectrum of what blackness means in theory, concept, as a lived practice.”

Kantor explained that, of the four focuses of the exhibit, she has the most fun analyzing the pieces created from non-traditional materials. In describing her attraction to that, she referred to a piece that easily catches the eye of visitor’s as they enter: Wilmer Wilson IV’s staple-laden painting, “Pres. On plywood.” It’s a rendering of two figures holding coffee covered with what seems like thousands of office supplies — namely staples.

“It’s a really common material — it’s something we see, we know, we recognize,” Kantor beamed. “I think he’s playing with ideas like armor, what gets covered, what comes through, what is seen and what isn’t seen. All of [the pieces in this section] extend out from the wall in a different way than a typical object would … taking up space in a different way through the artwork.”

For nearly a decade, Young Gifted and Black has been curated by Matt Wycoff. Co-curator Antwaun Sargent, who Hinkle said she felt fortunate to share a connection with through the collection, is a writer and critic working with Gagosian Quarterly.

Kantor said that these two New York-based artists can readily find a place for the collection at U.C. Davis’s museum because of Lumpkin’s undying focus on education.

Kantor also observed that, when Lumpkin’s father reached the end of his life, he wanted to advocate for historically underrepresented artists.

“It was sort of a way to reach back to his own heritage with his father and his family, by focusing on artists of African descent,” Kantor said. “That’s one of the main reasons why we took the show because it aligns with what we’re trying to do in our own exhibition program. So on the surface of it, like what does this New York collection have to do with UC Davis? Well, it’s the spirit behind it. What he’s trying to do with it … is really aligned with what we do.”

Be the first to comment on "Young Gifted and Black exhibition at U.C. Davis reassess narratives around an American experience"