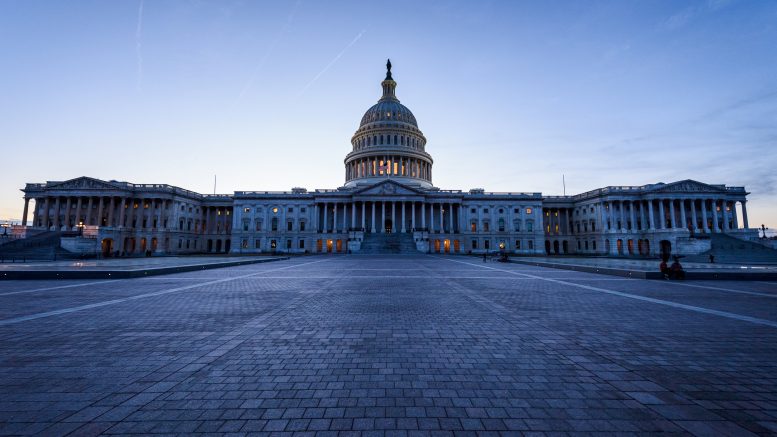 The United States Capitol Building during the blue hour.

Like its founder, the Capitol Hill Citizen pulls no punches exposing a body politic feeding off corporate donors.

In some ways, the Capitol Hill Citizen is radically traditional. The new alternative newspaper from Ralph Nader and his team at the Washington, D.C.-based Center for Study of Responsive Law arose from an urgency to provide the public with information missing from the mainstream media — like most alternative news publications. Its motto is “Democracy Dies in Broad Daylight,” a riff on the much ballyhooed “Democracy Dies in Darkness” slogan which the Washington Post added under its logo in 2017. Not to mention that the new paper is available in newsprint only — via snail mail. (For $5, to cover costs and postage.) Its website, at least for now, is an order form.

What makes the Capitol Hill Citizen stand out is its deeply informed focus on how power corrupts and by revealing the ugly truth about how policy gets made in Washington. The general public may be dismayed by Washington politics, but the Capitol Hill Citizen shows them why they should be outraged. Many of its writers are longtime progressive scholar/activists who have been challenging Washington politicians for decades. Of course, none more so than Nader himself.

At 88, Nader has been challenging Congress to do better for going on 60 years. His first exposé, 1965’s Unsafe at Any Speed, helped usher in seatbelt laws. Political scholars credit him with helping to create a bevy of consumer protections we take for granted today. Oh, he ran for president, too — four times. Some Democrats still blame him for winning more votes than Sen. Al Gore lost to George W. Bush by in Florida in 2000. (Never mind that several other candidates in that contest also won more than the 537 votes that cost Gore the state of Florida and, with the Supreme Court’s 5-4 decision, the White House.)

Nader was already busy when he launched Capitol Hill Citizen last month. He writes a weekly column, hosts a weekly podcast, The Ralph Nader Radio Hour, that’s syndicated on Pacifica radio stations and writes books continually. He remains involved with the American Museum of Tort Law, which he founded in his hometown of Winsted, Connecticut, in 2015. So why the Capitol Hill Citizen? Nader explains it in the conversation below.

Note: This interview has been edited for brevity and clarity.

Capital & Main: Why did you decide to start the Capital Hill Citizen?

Well, Congress now is covered, according to the Washington Post, by almost 500 full-time reporters — for The Hill, Politico, Washington Post, Wall Street Journal, AP — one after another. They all go up there to Capitol Hill or they do it virtually now and they dittohead each other. It’s all single-source, official source, journalism.

So there’s this whole other Congress — how it interacts with the people, how it ignores people, how it’s influenced by dark forces — money — and what it doesn’t do, which is enormous — and how it has given up its authority under the Constitution to the White House like never before. And so we decided to do three pilot issues. The first is already out, 40 pages or so.

Tell us what’s in the first issue.

It breaks a lot of taboos. It shows that members of Congress are not responding to anybody who’s trying to have a serious exchange with them. So there are two articles about how impossible it was to try to get through to Sen. Joe Manchin (D-W.Va.) and Congressman Richard Neal (D-Mass.), who is the chairman of the House Ways and Means Committee and what we call a crypto-Republican who never saw a tax break for corporations he didn’t like and refused to revisit the Trump tax cut. So these articles are almost verbatim telephone calls. So that’s one of the big obstacles to democracy — people in power do not return calls in an information age.

I have an article — “25 Ways the Canadian Health Care System Is Better Than Obamacare” — and it’s all quality of life. It’s not just money. People don’t have to worry when they want to move jobs whether they’re going to be covered or not. They don’t have to worry about endless computerized inscrutable billing systems ripping them off. They have their free choice of doctor and hospital, unlike a lot of Americans who have to go into a very strict arena.

Here’s another taboo — the Congressional Black Caucus is almost completely funded by the big oil, drug, agribusiness and chemical companies, and that’s why when members are in charge of committees — and they’re still in charge of major committees — they do not investigate economic exploitation in the ghettos, they don’t come out for universal health care, and they don’t even oppose banning methanol.

In the 1950s, when I was in law school and we were marching against the governor of Arkansas and other segregationists, we’d say, “Well, change is not going to happen until Blacks achieve high office politically.” Well, here we are. It doesn’t take long for corporations to corrupt everyone. If you look at their contributions, from Toyota, Procter and Gamble, Coca-Cola, the tobacco industry, Facebook, Amazon, chemical companies — one after the other is going to the Black Caucus Foundation. When you follow the money, you understand why members of the Congressional Black Caucus with very few exceptions are not going after corporate crime, bloated, wasteful military budgets that starve domestic priorities.

Why make Capitol Hill Citizen available only in newsprint?

The internet is so cluttered, so we want to try to wean the younger people into reading print, where they’re reading in solitude and not being distracted. We’re urging some of the older adults to give the paper to young people as a gift. Say, “Here, get off the screen for a few hours, and hold this paper in your hands and see what a different experience it is.” We are summarizing some of the articles and putting them on the internet, at some point…

There was another reason for printing: We had the Capitol Hill Citizen delivered to every member of Congress all at the same time. We wanted them to read it because they don’t get much print anymore. So bad is the indifference of members of Congress that it doesn’t matter what you do. They just don’t respond. Democrat, Republican, it doesn’t matter. They don’t respond.

We were so upset about this. We have stated that that’s the main problem confronting democracy in America. If you can not communicate with your public officials, they may as well be dictators and you can’t get anything done as we did in the ’60s and ’70s. In fact, we’re taking a bunch of these serious letters to senators and representatives that never went answered and putting them in a paperback called The Incomunicados.

Can you give an example of when you were trying to reach someone in Congress with important information and they just blew you off?

Oh yeah, we have lots. During the impeachment of Trump, we found 12 solidly grounded impeachment offenses by Trump and they were regular, daily, brazen things — not just a one-off thing like Watergate. We could never get anybody’s ear.

What most people don’t know is that Congress has become like many state legislatures — they’re controlled by four people, two in the House, two in the Senate, Republican, Democrat, Republican, Democrat. And so House Majority Leader Nancy Pelosi (D-Calif.) decided she was only going to go after Ukraine matters, ignoring all others, like defying 120 congressional subpoenas — that’s an instant impeachable offense.

Nixon was about to be impeached and convicted on one obstruction of justice charge. Obstruction was a way of life with Trump, and they still would not go after him and they wouldn’t answer us.

Another one is all these illegal wars of empire. We were writing letters to the House Foreign Relations committee reminding members that only Congress is allowed to declare war and you’ve handed that power over to the president, regardless of the party. No answer.

During the pandemic we proposed a special commission under the National Institutes of Health because Trump was defying the science and talking bleach as a cure. No answer from the Democrats on the respective committees.

Do you think the Democrats are still pissed at you for the 2000 election? I mean, who are they not responding to?

Everybody. Everybody has the same complaint, but nobody will make it public because it exposes them as weak if they can’t get anyone to respond. I’ve talked to some members of Congress and they say they don’t get responded to when they send messages to their own colleagues. They’re all silos.

So that’s why we started the Capitol Hill Citizen. It’s so easy to have wonderful articles that none of the media covers.

We did the first article on a new group that has started in Washington. The Congressional Progressive Staff Association. There’s 1,000 members now. They’re going to start forming a union. They formed for another purpose a year ago — that the staffers were not in touch with each other. They didn’t know what the others were doing. We couldn’t have gotten anything done in the ’60s and ’70s on consumer and environmental policies if congressional staffers didn’t know each other.

So I would call up the Post or the Times and I’d say, “Don’t you know this is a new group worthy of a story?” and they would say, “We’re too busy covering what’s going on.” So we broke the story. We have an interview with the founder, Jacob Wilson, from Pomona College. I wrote a column about him. I had him on my radio hour. It didn’t matter. They’re clueless. It’s all official source journalism. It’s like one takes off like a blackbird and the others all follow.

Noam Chomsky, whom you interview in the Capitol Hill Citizen, has said he’s never seen a worse time in this country’s politics. You are friends and contemporaries. What do you say?

That’s true. And that’s because there’s been a collapse of the labor movement. The military-industrial complex is not challenged by anyone; it’s taboo except for a dozen mild progressives raising the issue. So they don’t have any standing.

Aren’t you preaching to the converted by publishing in print? I’m feeling very skeptical that young people will read a newspaper.

Right now, we’re looking for one-tenth of 1%. Give us one-tenth of 1%, and you’ll watch the difference. Most young people today are completely addicted to the internet. So you bypass them. You say, “Look, one out of 1,000 of you.” Then it will be two out of a thousand. You start with the hardcore serious young people.