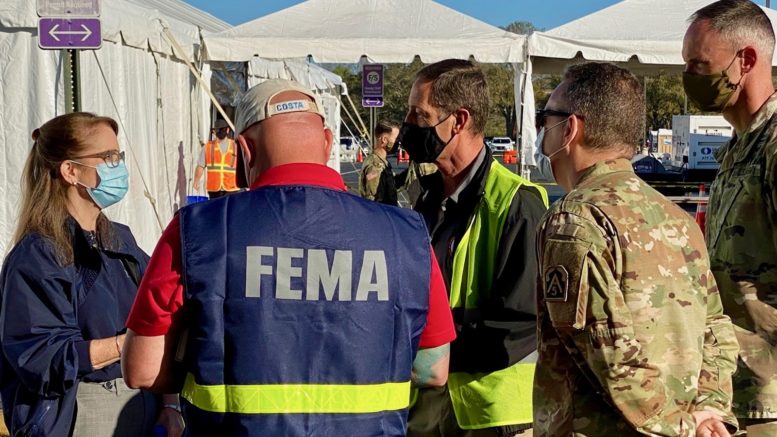 The Gridley Camp Fire community is operated by FEMA.

Dianna Franklyn gets wistful when she talks about her old home in Concow.

“I was a collector of many fine things,” she said. Franklyn, who’s 73, went on to describe the coin collection she inherited from her father and the Purple Heart her late brother received for his service during the Vietnam War.

Now, it’s all ashes. Like many Camp Fire survivors, Franklyn moved around after her home was destroyed in the deadly 2018 blaze, staying at multiple shelters and then at a motel in Orland. Franklyn’s escape left her not only with emotional trauma but also physical burns.

To this day, she feels unmoored by the loss of her community, her home and all traces of her family’s history. “My lifeline is gone,” Franklyn said. “Like [I] wasn’t there.”

Most recently, she settled into a mobile unit in the monochrome world of a Federal Emergency Management Agency housing development in Gridley.

Many Camp Fire survivors—particularly low-income renters or those on fixed incomes, like Franklyn—wound up there after finding it next to impossible to secure an affordable place to live in a region that lost 14,000 homes overnight. They couldn’t compete with well-insured survivors in the tight market immediately following the fire, nor has it been any easier amid today’s seemingly ever-increasing prices.

Of the 684 households placed into FEMA housing in Butte County as a result of California’s deadliest wildfire on record, 77 remain in such locations. Now they’re running out of time. FEMA is permanently closing its disaster housing on Sept. 13, and as the agency winds things down, it will start charging rent as of June l.

The rent rates are set according to U.S. Department of Housing and Urban Development fair market value, but these prices are not necessarily affordable. According to data for Butte County in 2021, prices range from roughly $900 for one-bedroom to $2,064 for four bedrooms. Residents can appeal by providing documentation that they do not have the financial ability to pay, but they will continue to accrue rent until the appeal is processed.

Franklyn’s proposed rent—$894 a month—poses a financial hardship, she said. She’s worried, telling the SN&R she has nowhere to turn for help.

Though Franklyn was a homeowner, she was uninsured and her property in Concow poses construction challenges. She’s tried to secure an RV, but every lead has fallen through.

“I’m tired. All I want to do is go home,” she said. “I’m thankful for everything I’ve got, but I’m one who is slipping through the cracks.”

Lynne Spencer, who has been assisting Camp Fire survivors at the Butte Wildfires Distribution Center in downtown Gridley since November 2018, has heard countless stories from survivors in the same position. Many have told her that they will be living in their cars once the FEMA community closes.

“You can just feel their anguish,” she said. “[People] say, ‘It’s been two years, [that] they should be all settled.’ But, the thing is, we’ve never had a fire like this before. We’ve never had so much loss.”

FEMA spokesman Robert Barker said that from the time survivors enter their temporary housing units, the federal agency requires them to work with a case manager and show that they are making progress toward securing permanent housing in order to stay.

“FEMA continues to work closely with [the California Governor’s Office of Emergency Services], local officials and volunteers to help the remaining families find a permanent housing solution. Disaster case managers are also working one-on-one with these families to help connect them to available resources and assist in executing their personalized disaster recovery plan,” he wrote via email.

The federal agency originally planned to shut down all Camp Fire housing locations this month. However, Shelby Boston, director of the Butte County Department of Employment and Social Services, advocated for an extension. FEMA granted the county four additional months and “has been very clear—that’s it,” she told the SN&R.

Boston is concerned about what’s going to happen over the coming months. Not everybody is going to be ready or able to find housing, she said, and some likely will turn to their cars or RVs because they have nowhere else to go.

“That’s the worst-case scenario. That is absolutely not what the county wants to see happen to any of these folks,” she said.

While FEMA is the primary lead on housing those individuals, Boston said, the county began doing targeted outreach to the remaining occupants ahead of the original May closure deadline, sending out physical mailers and making phone calls. Her team, which provides disaster case management services via a contract with AmeriCorps (which expires June 30), noted that significant barriers to securing affordable housinginclude insufficient income and lack of credit history.

Many have been holding out for a PG&E settlement payout, she added.

Occupants are allowed to purchase their units, but that option is fraught with challenges.

For starters, the homes will be sold at fair market value, a likely insurmountable obstacle for those with little means. Additionally, units do not meet wildland-urban interface fire safety standards, according to Butte County Deputy Administrative Officer Casey Hatcher. This means they can be treated only as temporary housing in 95 percent of the burn scar.

Come mid-September, whatever housing units are not sold to occupants—or donated to governmental entities or volunteer organizations—will be auctioned off.

In Gridley, Spencer at the Butte Wildfires Distribution Center is still serving some of the same Camp Fire survivors who have been coming since the immediate aftermath of the disaster. She has grown close with them over the years.

Spencer fears that her friends and neighbors will become homeless in the coming months as FEMA prepares to close its development.

The housing market has been competitive in Gridley, she said. Homes are being completed, but they go fast. Meanwhile, rents have skyrocketed. Spencer referenced a family that can no longer afford today’s rental prices despite having maintained their employment throughout multiple disasters (the fire and then the pandemic). They went from paying $800 a month in Paradise to being quoted double that amount for similar units.

This is the case for a lot of people she has met, Spencer said.

“That’s when it hurts in your heart, when you realize they may not have a home in a few months,” she said.

Spencer said that the center will stay open as long as there is a need. For now, it’s scheduled to continue operating through July, at which point her team will re-evaluate.

“We don’t want to leave them hanging,” she said.

For Cecelia Huffman, a regular at the distribution center, the services there have been vital, particularly the food, which has kept her from going hungry on her limited income.

She recently secured housing, but it was far from easy. Huffman, who is 65 and disabled, lived in a FEMA community for nearly a year and a half. During that time, she constantly searched for an affordable place to live. Though approved for Section 8 housing, she was unable to find anything before her voucher expired, she said.

“Property owners didn’t like my numbers,” she said. “Everything has counted against us survivors on getting out, and there’s so many people applying for the same places. It’s not easy for sure, and at times it’s very disheartening.”

If it wasn’t for the help of those organizations, Huffman said, she’d still be in the FEMA development.

“It wasn’t by choice that I was there,” she told the SN&R.

Huffman is still adjusting to her new home. She said it’s difficult to feel a sense of peace and stability after living in transition for so long. Plus, Paradise was her home for 34 years and where she raised her kids. She misses her town, but also feels that it’ll never be the same for her.

“I feel thankful. There’s a lot of people who didn’t get near the help I got,” she said. “I’m just happy to have a place. It feels like this is temporary. But you never know.”

Be the first to comment on "Out of time: Camp Fire survivors facing rent, closures and nowhere to go"