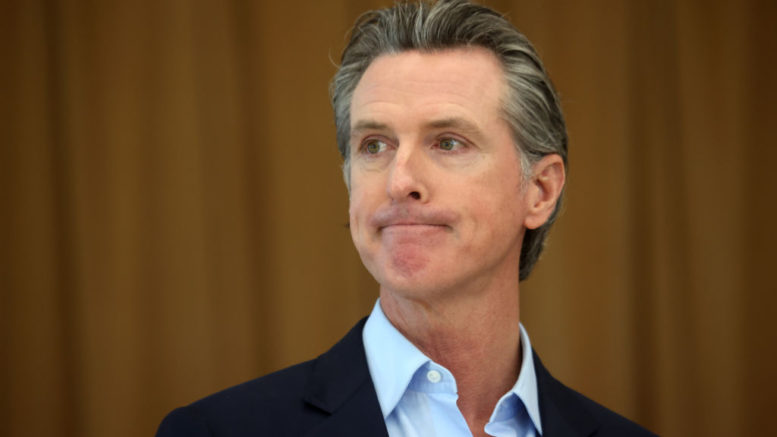 California Gov. Gavin Newsom looks on during a news conference about the state's efforts to reopen schools and businesses as he faces the threat of recall. (Photo by Justin Sullivan/Getty Images)

A first look at a new law meant to give laid-off hotel and other hospitality workers a shot at jobs lost during the COVID crisis.

This story is produced by the award-winning nonprofit Capital & Main and co-published here with permission.

Last fall, Gov. Gavin Newsom vetoed a bill designed to protect workers in certain industries who’d been laid off during the COVID-19 crisis. In doing so, Newsom practically invited state legislators to make another run at a worker-rights law.

“I recognize the real problem this bill is trying to fix – to ensure that workers who’ve been laid off during the COVID-19 pandemic have certainty about their rehiring and job security,” the governor wrote in his veto letter to the California Assembly. But as drafted, he said, the legislation would create “a confusing patchwork of requirements” that could vary from county to county.

The last part was a bit of an odd complaint. By their nature, worker-rights bills are terribly complicated, and they’re subject to all manner of protest and nit-picking by the businesses and employers who ultimately have to abide by them. Beyond that, in the absence of state legislation, local jurisdictions often take up the slack. With “right to return” worker laws enacted last year in Los Angeles, Long Beach and Oakland, among other areas, Newsom’s concern about patchwork rules was already being realized.

In other words, we don’t yet know whether Newsom’s 2020 veto ultimately led to a better worker-rights bill. We only know that a new bill passed — and that, by the looks of it, it was brokered under the tremendous pressure of an ongoing crisis.

It happened last week, when Senate Bill 93 raced through both houses of the Legislature in a matter of days. The governor quickly signed it, doing so during a virtual meeting with the Latino Caucus on Friday. This time, Newsom hailed the bill, saying that it “keeps us moving in the right direction by assuring hospitality and other workers displaced by the pandemic are prioritized to return to their workplace.”

The bill, which took effect immediately, requires some hotels and hospitality companies to give their former employees first crack at their old jobs – or any positions similar in scope and description to those jobs – when they become available. The companies have five business days after posting a job to offer it to qualified, laid off workers; the workers then have five business days to either accept or decline. If multiple laid off workers are qualified for the same job, the hiring preference is in order of seniority.

In a statement lauding the bill, the workers organization UNITE HERE Local 11 noted that the legislation’s protections will extend to more than 700,000 laid off hotel, event center, airport concession and building services employees in California. “This law brings hope and security to these professional service workers and their families,” the statement read.

Over the past year, we’ve spoken with dozens of laid off workers who have shared their stories of struggling to pay bills or access health care. Without question, some of those workers worried that companies might ultimately try to push them out in favor of “cheaper” employees once business started to bounce back, and the new legislation allays some of that concern.

But there are important caveats in the bill, some of which trail back to Newsom’s veto last year. Unlike that earlier version, SB-93 specifies that the protection applies only to workers who held their jobs for at least six months in 2019 prior to the pandemic, and only to those who were laid off specifically because of the COVID crisis, whether by state shutdown rules, the scaling down of the business “or other economic, nondisciplinary reason.”

The new bill also prohibits laid off workers from filing lawsuits if they think their employers are flouting the law. Instead, they have to go through the state’s Division of Labor Standards, “which shall have exclusive jurisdiction to enforce” the tenets of the legislation. Like its predecessor, the bill restricts the new law to hotels with 50 or more rooms and to “event centers” that have at least 50,000 square feet or (in the case of stadiums or large concert venues) more than 1,000 seats.

If a company chooses to hire someone else, it has to explain in writing why the laid off worker was deemed not qualified for the new job. An employer found to be in violation of the law could be fined up to $600 per affected employee per day.

In a hearing last week, state Sen. Maria Elena Durazo (D-Los Angeles) acknowledged the compromises, including the fact that the legislation now carries an expiration date: Dec. 31, 2024. The bill is “very narrow this year,” Durazo said, according to the Sacramento Bee.

Nevertheless, and predictably, the new law drew the ire of the California Chamber of Commerce. In a letter sent to legislators prior to the bill’s passage, chamber executive vice president Jennifer Barrera said that SB-93 “places additional onerous burdens on the industry as it struggles to reopen” and claimed the legislation was “completely unnecessary,” since the businesses affected were already bringing back their laid off employees. “It is common sense and smart business practice to rehire known, trained, and former employees who were terminated as a result of the state shutdown,” Barrera wrote.

Those sorts of dubious reassurances, offered without statistical support, do little to assuage the concerns of workers who in some cases have been hoping for more than a year to return to their jobs. “We know that the hospitality industry has been decimated by the pandemic, but it’s not the executives who are suffering. It’s the working people who are paying the price,” Durazo said. It will be worth closely watching to see whether the new bill lessens that pain.

Be the first to comment on "Winners and losers after Gov. Newsom signs California’s worker-rights bill"